At the end of 2018, we remember and respect Influenza, 100 years after the great pandemic

The Mother of All Pandemics

In the 1918-1919 calendar year, the world experienced the worst influenza pandemic in modern times. Coming on the heels of WWI, the H1N1 pandemic occurred in three waves – in the spring of 1918, fall 1918 and spring 1919. Estimates suggest that the pandemic infected a third of the world’s population, with 50 million people dying worldwide, including 675,000 Americans. Mortality was high at extremes of ages, but what sets this particular pandemic apart was the significant mortality (over half of all deaths) in young, healthy 20-40yr olds.

Why such devastating morbidity and mortality? Perhaps a combination of war-ravaged, crowded conditions, malnourishment, inadequate healthcare resources (many doctors/nurses were deployed at war), and poor hygiene. In the early 20th century, there were no influenza vaccines to prevent flu or lessen its symptoms; no antivirals to help reduce transmission; no antibiotics to treat post-influenza bacterial pneumonia.

The Smithsonian National Museum estimated that the total death toll of the 1918 pandemic outnumbered military deaths in both World War I and II. You can watch a video created by the CDC about the 1918 pandemic here. This avian-origin H1N1 pandemic has been called “The Mother of All Pandemics”, setting the stage for all of the subsequent epidemic and pandemic strains of influenza we have experienced. 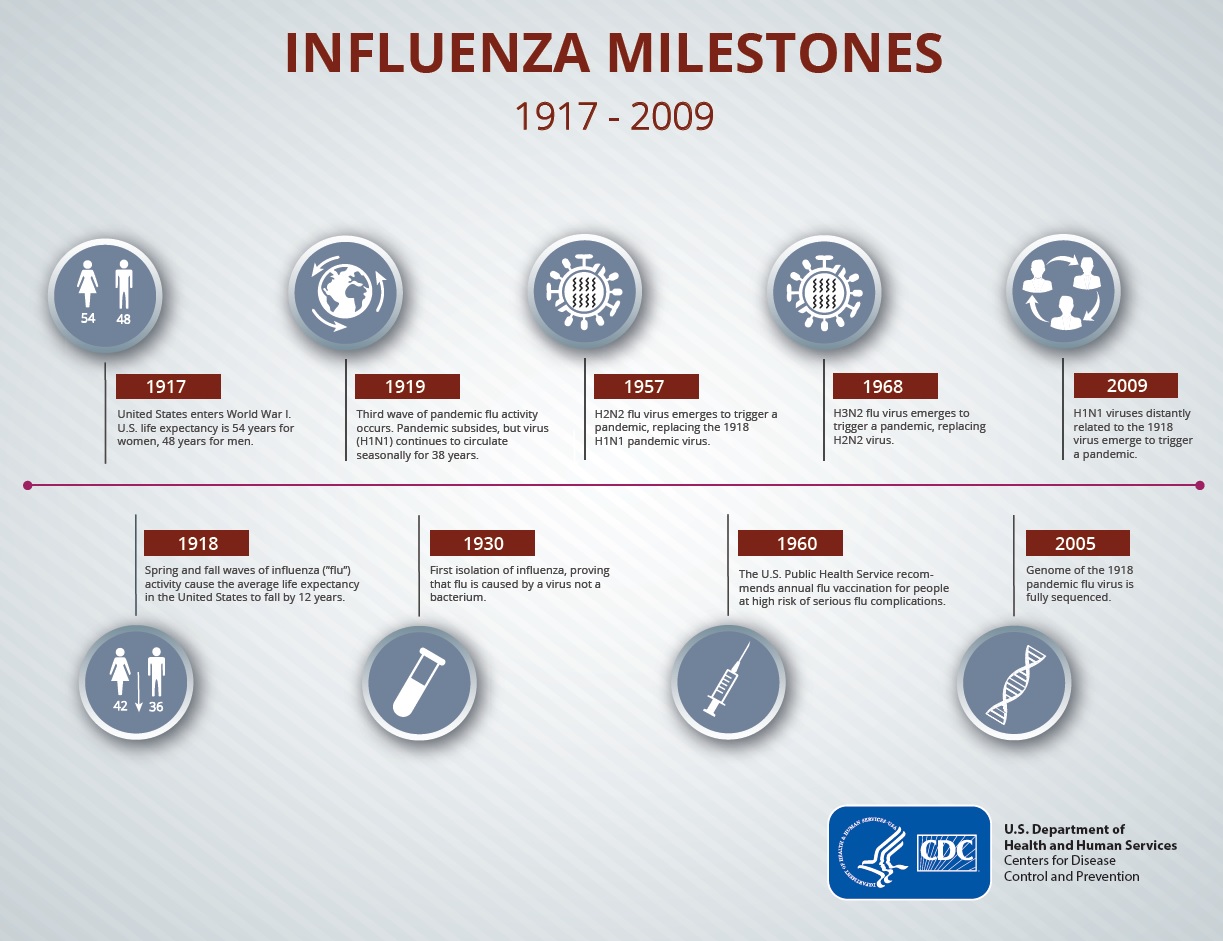 After 1918: Influenza still deadly, though not as devastating

In 1957-1958 an H2N2 avian influenza virus caused a pandemic resulting in 1.1 million deaths worldwide including 116,000 Americans. 10 years later, another avian-based virus H3N2 triggered a similar sized pandemic with 1 million deaths worldwide and 100,000 Americans. The H3N2 still circulates as a seasonal flu virus and is included in seasonal vaccines.

The next major pandemic was triggered in 2009 by a novel influenza A virus called H1N1pdm09, originating in the United States. By this time, seasonal influenza vaccines had included H1N1 but this variant was completely different from the seasonal flu vaccine, resulting in an estimated over half million deaths worldwide and up to 18,000 Americans.

Today: There is still work to be done 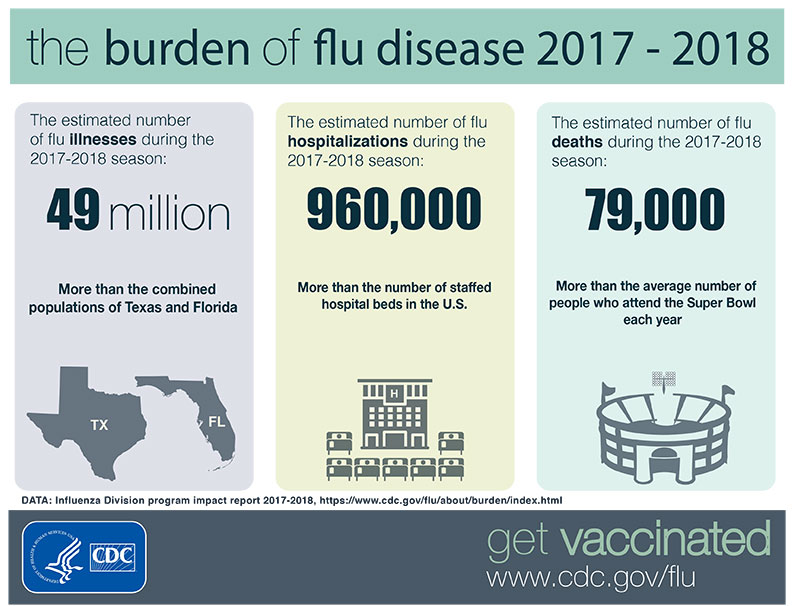 The 2017-2018 influenza season brought a serious influenza epidemic, with 48.8 million illnesses, 959,000 hospitalizations and 79,400 deaths estimated in the United States alone.

Recently, the Infectious Diseases Society of America (IDSA) released updated guidelines for diagnosis, and management of seasonal influenza. In the guidelines, they recommend testing for influenza in upper respiratory specimens of high risk patients, when testing can reduce unnecessary additional testing/inappropriate antibiotics, or when testing can influence chemoprophylaxis for high-risk household contacts. Vaccination is still recommended as the best way to mitigate the impact of seasonal influenza, but antiviral prophylaxis may be necessary in outbreaks or for certain at-risk populations.

More than 166.6Million influenza vaccines have been distributed in the US as of December 20, 2018. This year’s vaccine contains an influenza A H1N1pdm09-like strain, A H3N2-like, and influenza B strains from the Victoria and Yamagata lineages. Updated this year, the Advisory Committee on Immunization Practices (ACIP) also recommends the live-attenuated influenza vaccine (FluMist); however, the American Academy of Pediatrics suggests this only be used if the alternative would be no flu shot at all. The CDC can explain the types of vaccines available and who should get them.

What it is: Influenza is a respiratory infection caused by a virus that can be easily spread from person to person by contact with respiratory droplets.

Who can get it: Anyone can get the flu, but the very young, very old, and those who are immunocompromised are at increased risk for getting the flu, or developing serious complications from the flu. The flu season usually goes from October to May but usually peaks between December and February.

How we can treat it: Symptomatic treatment is still the mainstay of management – fluids, rest, and over the counter medications targeting stuffy nose, body aches, fever, and sore throat. There are antiviral drugs available for treating influenza, but most people recover without needing antiviral treatment. People at highest risk for severe influenza or serious complications (such as infants, elderly or immunocompromised individuals) will benefit from antiviral treatment. Antibiotics are NOT used to treat influenza, although may be used to treat a serious bacterial pneumonia occurring as a complication of influenza. 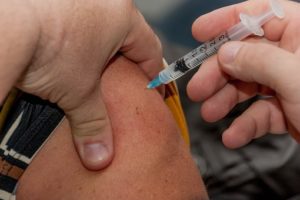 How we can prevent it: We can prevent the flu by getting the flu shot annually. The influenza vaccine may not always be a 100% match to all circulating strains, as we saw with last year’s flu season. It is true that even after getting the flu shot, a person may still develop the flu, but vaccination reduces the risk of influenza by 40-60%. Benefits of the vaccine include reducing illnesses from influenza, and preventing complications or dying from influenza.

Other ways to prevent spread include hand hygiene, limiting contact with people who have influenza-like illness, and if you have such an illness yourself, STAY HOME.

Final thoughts about the flu

Regardless of which vaccine is more appropriate, our ancestors would probably encourage us to just get ANY vaccine if it would help avoid recreating the influenza pandemic of 1918. There’s still time – it’s not too late so if you haven’t gotten your flu shot, consider getting it today! 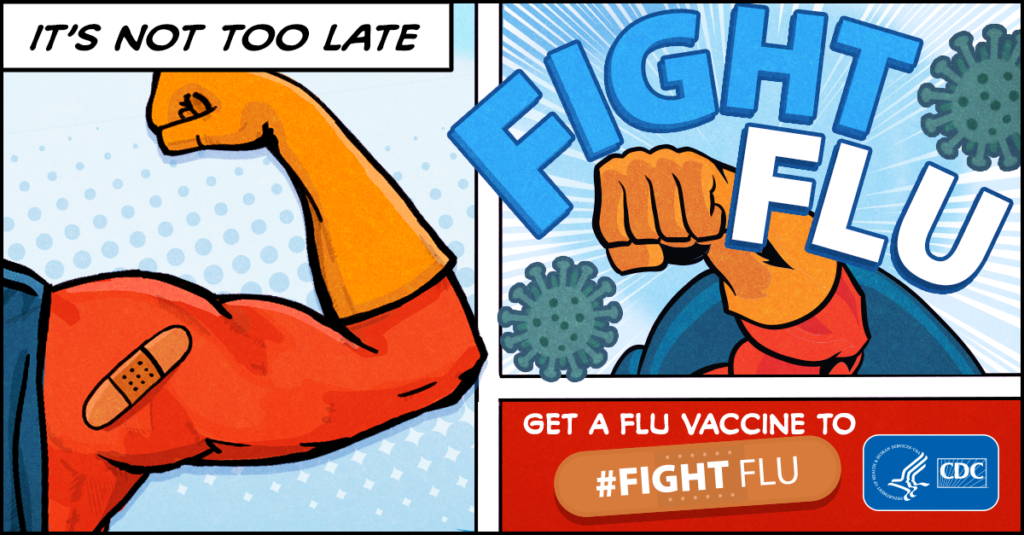 *Dr. Marcelin published a version of this article on the HAI Controversies blog on 12/20/18*

Posted in Infection Prevention and Control