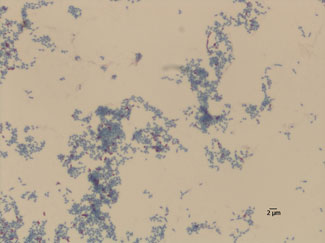 Nocardia is an aerobic, gram-positive bacterium commonly found in soil, decomposing vegetation, fresh water, and salt water. Nocardia is typically considered an opportunistic pathogen, but there have been several cases of nocardiosis occurring in immunocompetent hosts. Patients that are most at risk of developing nocardiosis are those with malignancies, human immunodeficiency virus (HIV), solid-organ and hematopoietic stem cell transplants, and long-term use of cell depleting medications such as corticosteroids. Nocardia infections most commonly present as a pulmonary infection, but may also include central nervous system involvement and skin abscesses. Nocardiosis usually requires a long course of treatment and traditionally, trimethoprim/sulfamethoxazole (TMP/SMX) has been the drug of choice.

Although there are numerous case reports available about the treatment of Nocardia infections, the lack of randomized controlled trials hinder the ability to make concise recommendations on drug dosing and treatment duration. Regardless of the site of infection, high dose TMP/SMX (800mg/160mg) given twice a day seems to be the most effective for eradicating Nocardia infections. The duration of treatment varies based on the location of the infection. Pulmonary infections should be treated for at least 3 months upon hospital discharge. Extending that duration to 6 months may also be appropriate if the patient is not responding as quickly or abscesses are still present on the CT exam at follow-up. Brain infections should be treated for at least 12 months upon hospital discharge. Cutaneous infections should be treated for at least 2 months. As with any of these infections, patients should be started on treatment as soon as Nocardia infections are identified. One area of variability is the amount of time patients are treated while inpatient because it will take each patient a different amount of time to become stable enough to discharge. The impact of the variation of overall treatment duration still remains unknown in the treatment of Nocardia. These recommendations are based on individual case studies and while they can be applied to other similar cases, it is important to take into account that additional agents may need to be added or substituted if susceptibility testing demonstrates resistance to TMP/SMX.