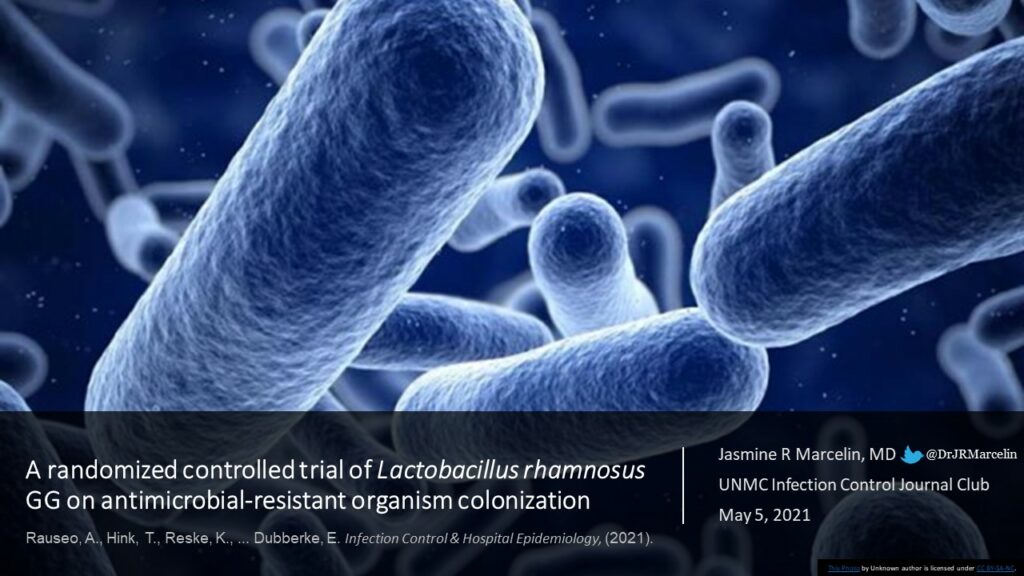 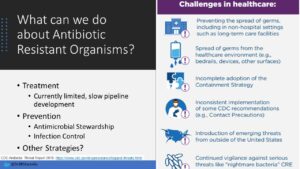 The gut microbiota have been examined as organisms of interest in the quest against antimicrobial resistance because while they can be disrupted by systemic antimicrobial use, the gut microbiota themselves may prevent overgrowth and colonization by pathogenic bacteria. Thus the interest in probiotics, with multiple potential advantages including relative safety, low cost, ease of administration and diversity of activity. However, there is still much to learn about the potential benefit, including its use in immunocompromised patients, adequate dosing for efficacy, and which strains are actually useful (McFarland et al.). Prior studies have demonstrated lower rates of C. difficile infection in probiotic recipients compared with placebo recipients (Johnson et. al).  Conversely, other studies have shown no benefit; for example in an RCT pilot of Lactobacillus rahmnosus in ICU patients there were no significant differences in acquisition or loss of any multi-drug resistant organisms compared with placebo (Kwon et. al.)

So this is what we end up telling patients when they ask us about probiotics to prevent C. difficile and antibiotic resistance:

Hence, the important aim of this study by Rauseo et al.: To determine whether Lactobacillus rhamnosus GG (LGG) can safely prevent intestinal colonization due to antimicrobial resistant organisms (AROs).

This was a single center double-blinded, randomized, placebo-controlled pilot trial conducted at Barnes-Jewish Hospital, St. Louis, MO from January 2014-September 2015 among hospitalized adults over 18yrs. Anyone who was immunocompromised, actively dying, or currently having diarrhea was excluded. Interestingly, they also excluded any non-English-speaking individuals. People randomized received either LGG or placebo by orally from enrollment until discharge, and stool/rectal swabs obtained on enrollment and every 3 days until discharge. Primary outcome was overall ARO acquisition, secondary outcomes focused on loss/acquisition of individual ARO, and they collected safety endpoints like mortality and development of Lactobacillus systemic infection.

So can Lactobacillus rhamnosus GG (LGG) can safely prevent intestinal colonization due to antimicrobial resistant organisms (AROs)? The answer based on this study is: NOPE. Unfortunately, there were no practice changing conclusions from this study, but negative studies are important and should be reported. While it is disappointing that we don’t have anything new to tell our patients based on this study, it is still important that we can tell them that there is still not data that probiotics will harm them if they choose to take them.

While the RCT design was desirable, some of the limitations of this study include small sample size; short duration on study drug; potential impact of missed doses and systemic antibiotics on the Lactobacillus effectiveness; and the use of a single organism probiotic instead of a cocktail. Perhaps with a larger, multicenter design based on this preliminary data, the authors may finally be able to help us find the answer to this important question.

With respect to its aim of evaluating the impact of probiotics on ARO, this study is not that controversial or groundbreaking. However, it is perplexing that the authors chose to lump individuals into White/Nonwhite categories only, because that assumes White is the default, when in fact, the Black and White populations of St. Louis are almost equal. Additionally, the “nonwhite category” only includes Black and Asian participants; the ethnicity category in the demographics is absent (despite the fact that the city of St. Louis includes about 4% Hispanic/Latino people); and the authors excluded non-English speaking people, without explanation or scientific justification in the article regarding these choices. These represent some missed opportunities by both the authors and the journal to ensure that equity is adequately addressed in research assessing the impact of therapeutics on clinical disease.

Check out a letter to the editor I submitted about these points in collaboration with Nada Fadul MD, Kelly Cawcutt MD, and Jacinda Abdul-Mutakabbir PharmD, with some suggestions on how researchers and journals can commit to equity even if the topic of scholarship is not health disparities.

Health Equity scholars like Dr. Rhea Boyd and others have been calling for a systematic approach to addressing race and equity in biomedical research and publishing for some time now, and I hope that researchers and journals are listening.