Pseudomonas In Cystic Fibrosis lung disease: Time to dispense with the shotgun approach 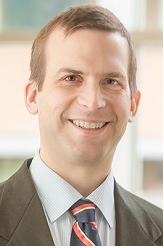 WE are absolutely THRILLED to have Dr. Dickinson write this guest blog post in honor of Cystic Fibrosis Awareness month. There are few conditions in which antimicrobial treatment is determined at least in part, by organ function, and CF is one of those states. Here at UNMC ID, we are committed to bringing colleagues together to teach each other, garner greater understanding and hopefully foster further collaboration. This wonderful commentary by Dr. Dickinson teaches us about Cystic Fibrosis, Treatment of infections, new studies on the horizon and supports the stewardship dogma of targeted therapy!

Management of Pseudomonas aeruginosa airway infection in cystic fibrosis lung disease: Time to dispense with the shotgun approach in favor of a targeted approach with precision therapeutics.

Cystic Fibrosis (CF) is an autosomal recessive genetic disease due to dysfunction of the cystic fibrosis transmembrane conductance regulator (CFTR) gene leading to abnormal chloride ion transport. Approximately 30,000 individuals in the United States have CF. There has been extraordinary improvement in the survival among those with CF and life expectancy has increased from the late adolescent years in the 1980s to the mid 40s today. There are now more adults living with CF than children (Figure 1). New CFTR modulators developed within the last 6 years offer further hope to CF patients to prevent bronchiectasis and loss of lung function. 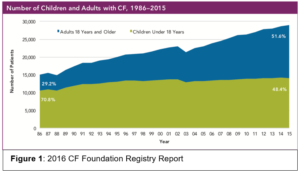 In the airways, lack of chloride transport from dysfunctional CFTR leads to reduced airway surface liquid. As a consequence, normal mucociliary clearance is drastically reduced as airway mucus is thick and tenacious. This defect of innate immunity leads to a failure to clear pathogens from the airway. Early in life, children develop infections with Staph aureus, streptococcus pneumoniae, and hemophylus influenzae. Later in life, however, CF patients may be infected with Pseudomonas aeruginosa. Due to the fundamental defect in mucociliary clearance, the Pseudomonas infection develops mucoid strains with biofilm development in the airways. Most CF centers, including ours at UNMC, define chronic infection as presence of a microorganism in >50% of sputum cultures in the preceding 12 months. CF patients with chronic pseudomonas infection have reduced lung function and survival compared to non-infected persons.1,2,3 Therefore, CF clinicians aggressively treat chronic Pseudomonas infection of the airways and prevent CF pulmonary exacerbations which accelerate lung function decline.4

Given the fundamental mucociliary defect, the anti-pseudomonal strategy is palliative rather than curative- to reduce the microbial burden of disease. Antibiotics remain the workhorse for this strategy. As the airway concentration can be up to 100x higher with nebulization vs. systemic administration, inhaled antibiotics are the primary modality. In the 1990 several RCT indicated that nebulization of tobramycin in CF patients with Pseudomonas infection increased lung function, reduced pseudomonas sputum density, improved quality of life, and increased the time to next exacerbation (Figure 2).5,6 A number of formulations have been approved. The most common rely on 300mg dose of tobramycin nebulized for inhalation twice a day for 28 days. Early clinical trial design and subsequent practice patterns have patients alternate months off and on therapy. As with all aminoglycosides, nephrotoxicity and ototoxicity are potential adverse effects to monitor. Chronic administration of aerosolized antibiotics may alter antibiotic susceptibilities as well. The NEJM study noted a slight increase in the proportion of patients with tobramycin MIC> 8mg/ml at the conclusion of the study- although this was less than the effect from intravenous tobramycin.5 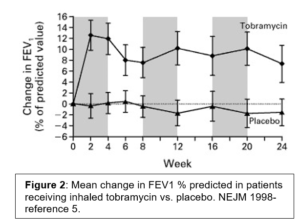 Patients with CF have a tremendous treatment burden that may add up to 1-2 hours per day on average7. Airway clearance, nebulized treatments, pancreatic enzyme replacement, insulin management for diabetes all require significant resources and time each day. Dry powder formulations of tobramycin have been introduced that improve compliance due to ease of use and reduced treatment time. The EAGER trial demonstrated that dry powder tobramycin has similar efficacy as nebulized tobramycin.8

In 2010, nebulized aztreonam was approved for patients with chronic Pseudomonas airway infection. As with tobramycin, treatment strategy is 28 days on and 28 days off therapy. TID dosing of nebulized aztreonam had similar efficacy as tobramycin when randomized to placebo9-10. Although strong clinical data is lacking, most CF clinicians alternate aztreonam and tobramycin to give patients continuous anti-pseudomonal treatment. The CAT trial attempted to address if using continuous alternating antibiotics (both aztreonam and tobramycin) was superior to single agent (tobramycin alone) with no second drug during the off month. Unfortunately, enrollment was limited as clinicians and patients were reluctant to change what had become standard practice- to treat with continuous inhaled antibiotics. Therefore, no firm conclusion could be determined11.

Azithromycin has pleotropic qualities involving the macrolide ring structure that reduce neutrophil mediated inflammation in CF. Several trials indicate that CF patients with chronic Pseudomonas airway infection have the greatest benefit from azithromycin.12,13 Standard regimen is 500 mg of azithromycin (250mg in children) on three days a week schedule -typically alternating days. According to CF Foundation registry data, the majority of those on inhaled tobramycin for chronic pseudomonas infection also were treated with azithromycin. Interestingly, recent post-hoc analysis of clinical trial data14 and in vitro data15 suggests that azithromycin may negatively interact with tobramycin by inducing antibiotic resistance factors in Pseudomonas strains. Analysis of clinical trial data from

the inhaled aztreonam study revealed that CF patients chronically treated with both inhaled tobramycin and oral azithromycin had no improvement in lung function compared to those co-treated with aztreonam and azithromycin (Figure 3). While this was a post-hoc analysis in a heavily pre-exposed tobramycin cohort, it does raise sufficient concern to warrant further study. In vitro, azithromycin treatment of clinical pseudomonas isolates led to antagonism of concurrent tobramycin treatment with a reduction in the antibiotic mediated-decrease in colony forming units (CFU) and increase in pseudomonal drug efflux pump genes, MexXY (Figure 3). This potential serious drug-drug interaction led to the launching of a new study, the TEACH trial that will prospectively evaluate the interaction between azithromycin and inhaled tobramycin. The lesson remains that no therapy is completely benign and drug interactions may have un-intended consequences. It is also for difficult for physicians to stop any chronic treatment that patients have been on for years when effectiveness is difficult to gauge. 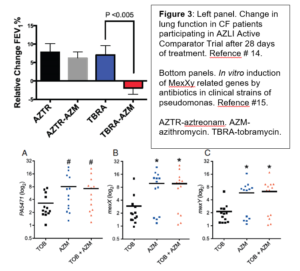 On the horizon, new antibiotic and non-antibiotic strategies are emerging. Clinical trials are underway for nebulized liposomal amikacin and levofloxacin. IV Gallium is FDA approved for MRI contrast. Gallium has iron chelating properties that interfere with Pseudomonas iron metabolism leading to reduction of both planktonic and biofilm pseudomonas levels.16 The Adult CF Center has been part of the phase II clinical trials looking at IV Gallium in CF patients chronically infected with Pseudomonas.

The CF community has often taken a shotgun approach to management of a deadly disease that had, until recently, a life expectancy only into late adolescence or early adulthood. New therapies including new CFTR modulators that improve Cl- transport in the airways offer to change the paradigm of CF treatment. As we enter into this new era, CF clinicians will need to re-examine practice patterns of indefinite antibiotic treatment of chronic mucoid pseudomonal airway infection. New randomized controlled trials will be needed to explore the optimal treatment strategy. This strategy will likely involve both antibiotic and non-antibiotic anti-microbial agents to maximize outcomes in CF while reducing adverse effects.

One thought on “Pseudomonas In Cystic Fibrosis lung disease: Time to dispense with the shotgun approach”