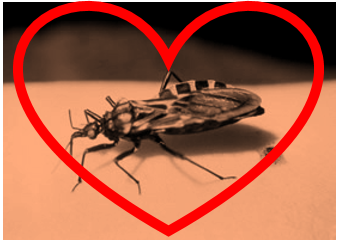 It’s almost Valentine’s day, and in honor of the one day of the year commercially dedicated to L’Amour, we thought would be fun to talk about some of the Infectious Diseases associated with “kissing”.

Infectious Mononucleosis or “Mono” is an illness most commonly caused by a herpesvirus called Epstein Barr Virus (EBV).  Mono is characterized by a constellation of non-specific symptoms including sore throat, fatigue, muscle pains, fever, headache and lymphadenopathy (swollen lymph nodes).  It is transmitted through exchange of body fluids like saliva, semen, blood, etc.

Mono is diagnosed clinically, and sometimes with additional serologic testing which can identify EBV as the specific cause of Mono. A recent case of Mono is likely if a person has antibodies to the viral capsid antigen (VCA) in the absence of EBV nuclear antigen (EBNA) antibodies. The monospot (heterophile antibody) test relies on a patient’s serum ability to agglutinate sheep blood red blood cells, but is not very sensitive and may miss cases of Mono.

There is no recommended treatment for Mono other than symptomatic therapy.  Patients diagnosed with Mono are usually advised to avoid body fluid contact with others, avoid sharing personal items such as toothbrushes. Additionally, because of enlargement of the spleen, patients diagnosed with Mono are typically advised to avoid contact sports for 6-8 weeks after diagnosis, as they would be at higher risk for splenic rupture as a result of rough contact.

Kissing ulcers refer to symmetrical ulcerated lesions occurring in folds of skin. It is thought that they are formed as a result of the ulcer on one side of the skin fold auto-infecting the other side after prolonged contact. This can be seen on the lips, labia or penis. This is not specific to one particular infection, and can occur with infections due to syphilis (caused by Treponema pallidum), genital herpes (caused by herpes simplex virus), chancroid (caused by Haemophilus ducreyi), lymphogranuloma venereum (caused by Chlamydia trachomatis L1-3 serotypes). 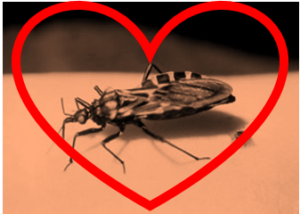 Chagas Disease is caused by Trypanosoma cruzi, a protozoan parasite transmitted to humans by triatomine bugs, also known as reduvid bugs, vampire bugs or kissing bugs. The bugs are called kissing bugs because they typically bite near the mouth or eyes. The bites are painless and although the bugs take blood meals during bites, T. cruzi is actually transmitted when the insect defecates near the site of the bite.

Chagas Disease is endemic in South America, and is generally asymptomatic.  If symptoms do occur in the acute stage of infection, they can consist of fever, lymphadenopathy, myocarditis (inflammation of heart muscles), and liver/spleen enlargement.  Years after infection, the chronic stage of Chagas disease can include enlargement of the esophagus and colon, weight loss, and the most serious complication of infection is cardiomyopathy.

In the acute stage of Chagas Disease, blood smears can identify various forms of the parasite. In the chronic stage (or in cases of solid organ transplant or transfusion-related infections), serologic testing (antibodies) or molecular testing (PCR) is necessary to make the diagnosis.  Treatment for Chagas Disease generally involves a consultation with the Centers for Disease Control and Prevention, as the antiparasitics (nifurtimox and benznidazole) are not readily available.

Of course, this list is not exhaustive. I’m sure there are other Infectious Disease syndromes that are associated with the word “kiss”. If you know others that were not mentioned, feel free to add a comment!