In Nebraska, US Antibiotic Awareness Week Kicks off with Proclamation from Governor Pete Ricketts 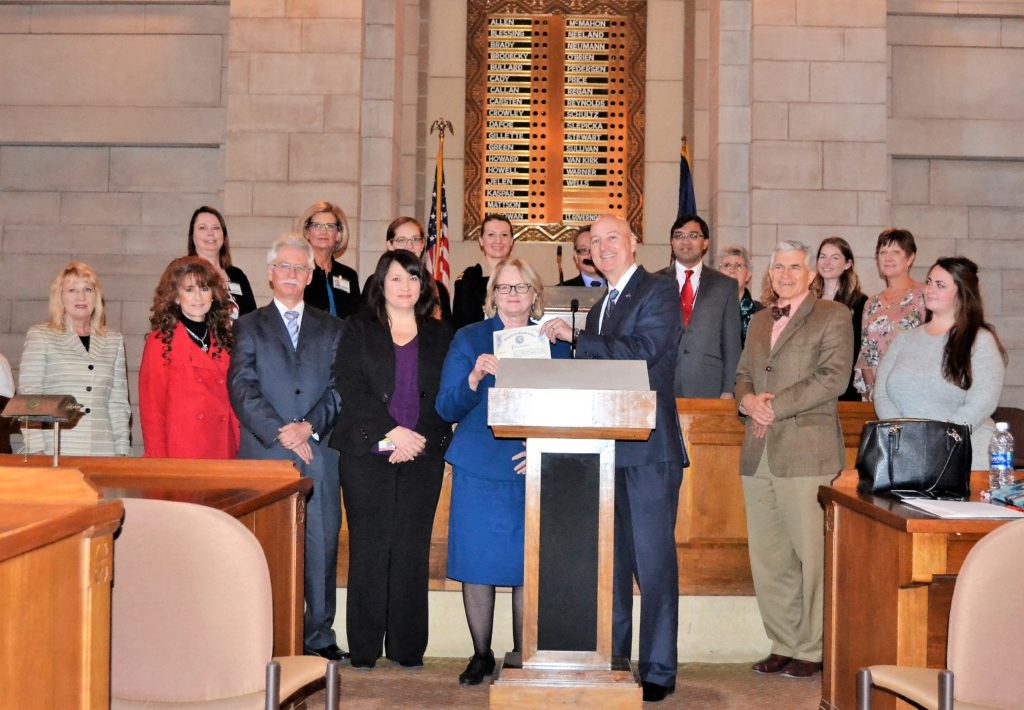 Antibiotic resistance is a growing national and global concern. Many factors contribute to increasing antibiotic resistance, including inappropriate or unnecessary antibiotic use in both humans and animals. Antimicrobial Stewardship is the commitment to appropriate use of antimicrobials, and both clinicians and patients can be antimicrobial stewards.  The Centers for Disease Control and Prevention (CDC) has declared November 13-19 US Antibiotic Awareness Week, with several web-based and national events to raise awareness. To commemorate this important week, on Wednesday November 8, 2017, Nebraska Governor Pete Ricketts signed an official proclamation at the Nebraska State Capitol declaring this week Antibiotic Awareness Week in Nebraska.

The proclamation signing was largely due to the efforts of Dr. Maureen Tierney, leader of Nebraska’s Healthcare Associated Infections Program, who prepared and submitted the initial draft of the Proclamation to the Governor’s office.  In attendance were Dr. Tom Williams (Director of Public Health and Chief Medical Officer), Jennifer Roberts-Johnson (Deputy Director of Public Health), Dr. Safranek (State Epidemiologist), and representatives from ASAP (Dr. Ashraf, Phil Chung, Kate Tyner, Teri Fitzgerald, and Sue Beach), MDstewardship, the Nebraska Hospital Association, the Nebraska Healthcare Association, and the Great Plains QIN/QIO.  During her speech at the Proclamation Signing Ceremony, Dr. Tierney spoke about the consequences of inappropriate antibiotic use and the need for antibiotic stewardship.

“WHEREAS, the CDC has declared the week of Nov 13th through the 19th U.S. Antibiotic Awareness Week as a way to improve antibiotic stewardship in communities, in healthcare facilities, and on the farm in collaboration with state-based programs; and

WHEREAS, the Nebraska Department of Public Health’s Healthcare Associated Infections program is dedicated to the reduction of antibiotic resistance, a major threat to the public health; and

WHEREAS, the inappropriate use of antibiotics may lead to further antibiotic resistance and an increase in untoward complications such as C. difficile; and

WHEREAS, the observance of Antibiotic Awareness Week will help patients be antibiotics aware and support smart use of antibiotics by prescribers.

NOW, THEREFORE, I, Pete Ricketts, Governor of the State of Nebraska, DO HEREBY PROCLAIM the week of November 13, 2017 as ANTIBIOTIC AWARENESS WEEK in Nebraska, and I do hereby urge all citizens to take due note of the observance.”

Formerly known as Get Smart About Antibiotic Week, US Antibiotic Awareness Week is an annual observance designated by the CDC to promote appropriate antibiotic use in the United States.

One thought on “In Nebraska, US Antibiotic Awareness Week Kicks off with Proclamation from Governor Pete Ricketts”