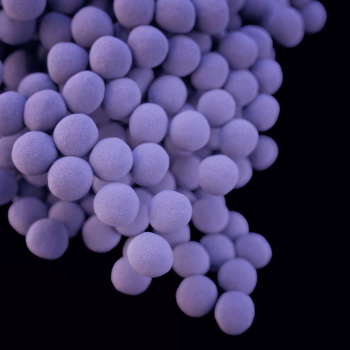 CHG is a very effective disinfectant that has been successfully utilized to prevent the spread of multi-drug resistant organisms (eg. MRSA) and prevent healthcare associated infections such as central-line associated bloodstream infections (CLA-BSI).  Unfortunately, there is concern that widespread use of CHG will promote resistance- particularly in staphylococci in which it has been observed that multi-drug efflux pumps encoded by qac A/B genes lead to low-level CHG resistance.

At UNMC, over a 7.5-year period, CHG was used to bathe patients in two distinct periods that were separated by over a year when CHG was not in use.  This served as a terrific “natural experiment” to see if use of CHG led to decreased susceptibility.  The research team tested strains of S. aureus clearly responsible for invasive nosocomial infections (bloodstream infections) for susceptibility to CHG.  Reassuringly, no emergence of resistance (decreased susceptibility) was observed.  In fact, the level of resistance was higher in the baseline period (when CHG was not in use) than during the study periods.

The results of this study provide reassurance that CHG can be used broadly in hospitalized patients without selecting for CHG-resistance in S. aureus.  However, these results do not exclude the emergence of resistance in the future and continued vigilance is warranted.

Read the entire study at:  https://www.cambridge.org/core/journals/infection-control-and-hospital-epidemiology/article/susceptibility-of-nosocomial-staphylococcus-aureus-to-chlorhexidine-after-implementation-of-a-hospitalwide-antiseptic-bathing-regimen/776D48E0315B4C44D2E161FD3C9B4E59

P.S. It should be noted that this research effort was largely conducted by an UNMC medical student!