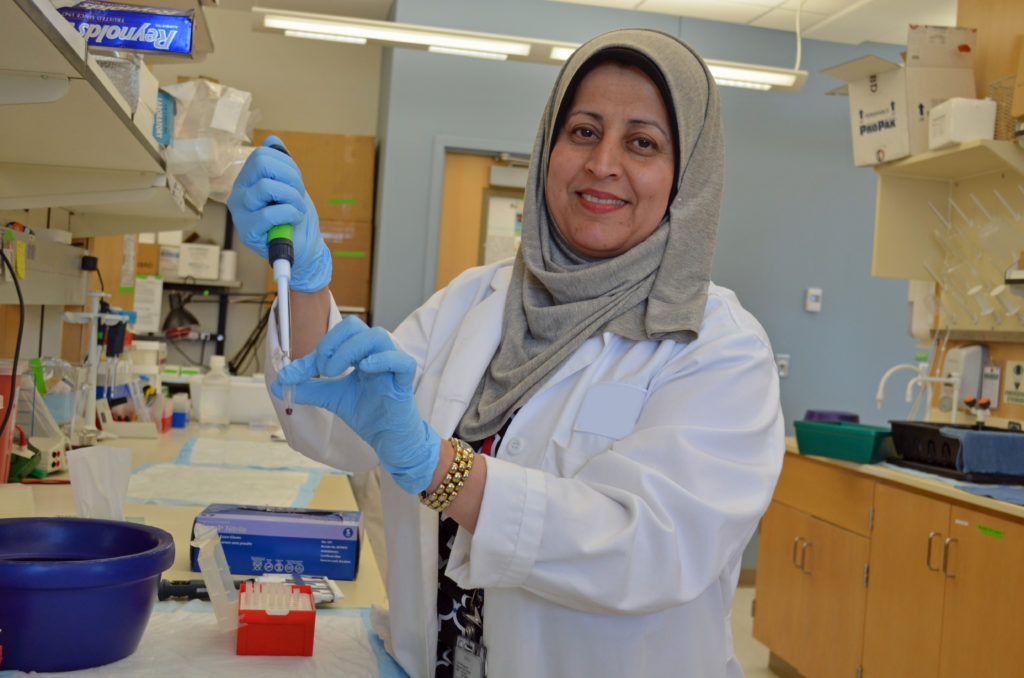 Before she earned her Ph.D., and before she came to UNMC as an assistant professor in the College of Allied Health Professions, Dr. Iman Ahmad worked for about 10 years as a radiologic technologist. It was demanding work, made more so by the work ethic she shared with many radiologic techs – she put the patient before herself.

“I was young and crazy and wanted to work hard,” Dr. Ahmad recalled. It never occurred to her how much radiation she, herself, might be taking on. She admits that she did not always follow best practices – for example, she would hold a child patient, in order to make the radiographic position go better, putting herself within the primary beam.

“I forgot about myself,” Dr. Ahmad said. And research shows that despite their own workplace rules, educations and better judgment, some radiologic techs do the same.

But now Dr. Ahmad is an educator and researcher. Her specialty is measuring redox status – that is, the increase or decrease, within our bodies, of oxidative stress. It’s a sought-after skill, and she is grateful to collaborate on a handful of research projects across campus.

But one close to her heart is a pilot study analyzing the redox status of those who serve in her old job – radiologic techs.

They remain dedicated to their patients. But Dr. Ahmad wants to help ensure the safety of those who are “occupationally exposed” to radiation.

“We are not scaring them,” she said. “This is about awareness.”

Even those who follow best practices to the letter, if they work double shifts and don’t take vacations, may be exposed to too much radiation. “Those doses will accumulate in your body,” Dr. Ahmad said.

Dr. Ahmad looks at whether the techs’ redox levels are able to remain in balance, or tip too far into oxidative stress.

A number of factors may come into play, and a follow-up study will delve into whether lifestyle and work habits make a difference, study how DNA damage is sustained and how other biomarkers can be identified.

Her pilot study, with a small number of Nebraska Medicine volunteers as subjects, found evidence that exposure to radiation within limits recommended by the International Commission of Radiation Protection (ICRP) in procedures with higher doses of radiation – CT scans and Interventional Radiography (IR), for example – have an altered circulating redox status as compared to conventional radiography and unexposed individuals.

Dr. Ahmad stresses that the low doses of radiation to which radiologic techs are exposed to is generally not high enough to cause direct damage but the concern is their long term effects, which are more worrisome as they include cancer and genetic risk.

“We can take it one step back,” she said. “If we do what we have to keep our redox levels in balance, we will be safe.”