Forty years ago there was a new College of Pharmacy building (see architect’s rendering). 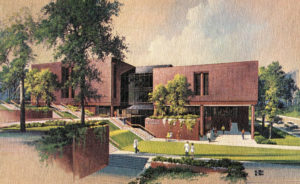 Pharmacy Hall on the Lincoln campus opened in 1918. It was replaced in 1958 by Lyman Hall, a new building for the college, named in honor of the college’s founding dean. As this building became outdated, in 1972 the NU Board of Regents approved incorporating the COP as a unit of UNMC, and authorized a new building for the college in Omaha. Classes and other functions of the COP gradually shifted to Omaha from 1972 until 1976, temporarily occupying other buildings on the UNMC campus. The new COP building was dedicated in October 1976. It contained 58,580 square feet, and was built at a cost of $3.2 million. In 2014 this building was renamed the Williams Science Hall.