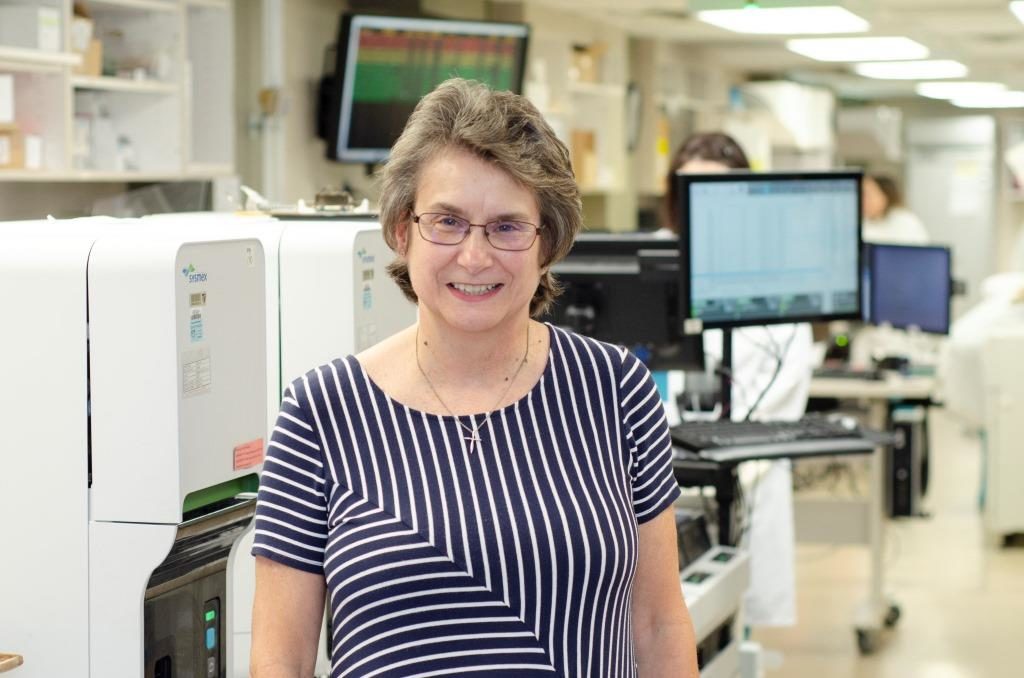 What do you want to be when you grow up?

It is the question we were all confronted with as we prepared to graduate high school. Like many of us, Karen Keller didn’t know the answer.

Fast forward four decades later, and Keller could not be any happier about her career decision being a medical technology coordinator in the Core Lab at Nebraska Medical Center. Keller celebrated her 40th service anniversary with the organization on Sept. 5.

“I’ve been treated well here and have had wonderful managers and colleagues throughout my 40 years,” says Keller. “Whenever that day comes for me to retire, I don’t know what I’m going to do – this is my identity.”

Impassioned words from someone who initially did not know what the medical technology field was when her Westside High School guidance counselor first suggested it as a potential career.

“My counselor asked what classes in school I liked, and I told her the ones with labs. She suggested I go into medical technology, which I had never heard of,” says Keller. “I researched the career and it sounded exactly like what I wanted to do.”

Keller graduated from the then medical technology program at UNMC in 1978 and started her first job as a bench tech at Clarkson Hospital in September of that year. She would later experience the changes to Nebraska Health System, The Nebraska Medical Center and now Nebraska Medicine. While the organization names changed, so did Keller’s job titles. She began as a medical technologist then her area of work became known as Clinical Laboratory Science and it is now Medical Laboratory Science.

“Through all those name changes, I still do the same work,” she says.

Keller spends her days working on the bench with her colleagues in the core lab, performing hematology, chemistry, urinalysis and body fluid tests.

Thanks to technological advances and computerized software, it can take only minutes to obtain a test result from a specimen. It’s a far cry from when Keller first started, before computer were implemented. Results were recorded by hand and hand-delivered to the patient’s chart by laboratory personnel.

“Back then, it could take hours to get a result back to the person who requested it,” says Keller. “Today, it may take only minutes to get results for one specimen, but that one specimen may be behind 50 others we are testing, since we do thousands of specimens daily in the core lab.”

According to data from the National Institutes of Health, an estimated 70 percent of all health care decisions affecting diagnosis or treatment involve laboratory tests.

“We are perfectionists in the lab,” says Keller. “We strive for 100 percent accuracy. It’s all about the patient. We are there to provide a service for the patient, so that is why getting results back accurately and quickly is important to us.”

In fact, Keller teaches students her mindset of “what if it was your mother’s blood?” when it comes to the importance of accurate results.

“Karen puts her whole heart into everything she does,” says Kathy Salerno, Core Laboratory manager. “Nebraska Medicine patients can rest assured that their care and well-being are at the center of all she does. While we count on her for that, her value extends beyond our own lab and organization as she educates students in the UNMC Medical Laboratory Science program and that’s an exponential impact.”

Keller has been teaching hematology to students since 1991 and that has become one of her favorite aspects of the job. In 2001, she was part of the then Clinical Laboratory Science department that earned the University of Nebraska University-Wide Departmental Teaching Award.

“The teaching is probably also what has kept me working here,” she says. “I’ve been teaching for 27 years and students still come up with questions that no one has ever asked me before. It keeps me on my toes, and I love seeing students grow in knowledge and confidence from their first day of the 50-week program to their last.”

Keller estimates she has taught 900 students since 1991, and for all the technical skills she has taught them with her 40 years of experience, they have taught her plenty of things and helped her be even better at her job.

“Aside from teaching me what Twitter and Snapchat are and things like that, they’ve taught me patience,” she says. “No matter if it’s learning something from students, your colleagues or through your own experience, you can’t ever stop learning. Change is constant and there is always something new.”

One thought on “Forty Years of Learning Something New Daily”