Recruiting for the Class of 2030: Part I 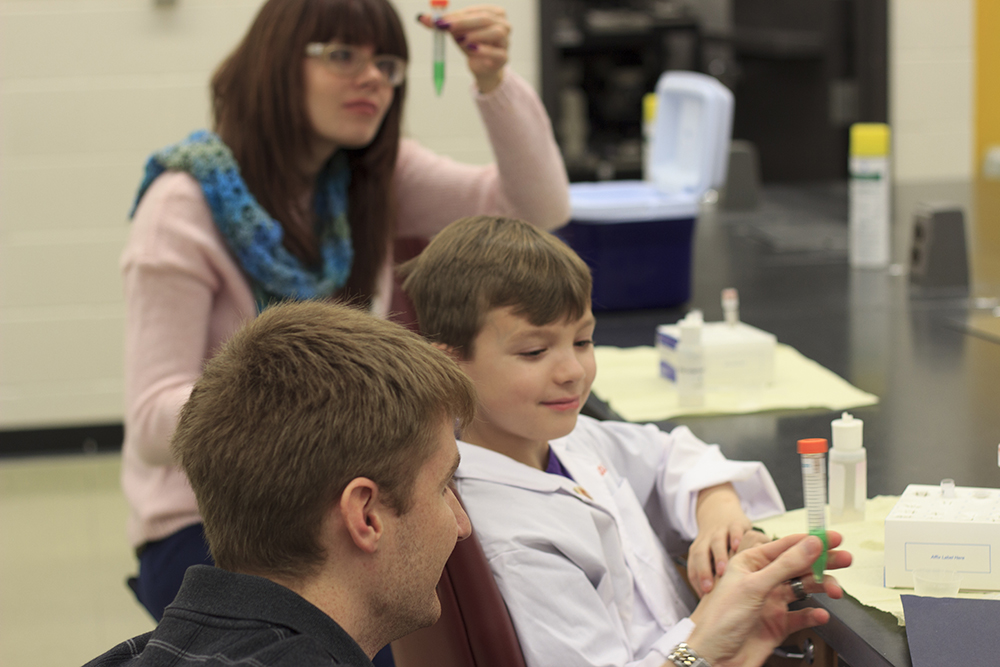 Which grandma can say she has her grandson’s (and daughter’s) DNA at home in the freezer? This one! It’s a different sort of holiday story.

My eight-year-old grandson, Nick, wanted math or science stuff this past Christmas, so we blinded him with science. We fulfilled his digital wish list of flash cards, experiment sets, a microscope, slides, and safety goggles, all of which delighted him as much as last year’s guitar. Then there was the junior lab coat.

White as a fresh snowbank, it was, but it looked a little plain. It needed some official embellishments. So, I had Nick’s name embroidered above the pocket in red and slapped a UNMC lapel pin on it (‘cause I’m all about the brand)! Then that coat looked ready for some serious medicine.

Kevin, who is a genuinely awesome guy, arranged a special tour of the student lab and clinical lab to take place two days before Christmas. So, of course, Nick got to unwrap the lab coat early and sport it through the halls of UNMC like a full-on scientist. My daughter, Hilary, (also with an affinity for science) was visiting from Des Moines, so she joined our excursion, too, sans lab coat but equally pleased.

We began in the student lab with the primordial battle between good and evil – under the microscope (battles are a thing for little boys): Wright’s stain blood smear showing white blood cells and red blood cells, and a Gram stain of Streptococcus pneumoniae found in a blood culture. We took turns peering at the tiny, purple and red squiggles while Kevin explained what we were seeing.

We took it all in, but Nick’s main question was why there were four clocks in the room, which I hadn’t even noticed. It turned out to be a good question. CLS students often have to time the lab tests, so they need to be able to see a clock from any vantage point. And we watched those clocks in the next phase…

Kevin handed Nick and Hilary each a little cup of clear liquid. They swished the briny fluid in their mouths for a minute (clock time), then spit it back in the cup. I won’t give away the whole experiment – you should take a tour and experience it yourself – but suffice it to say that there were test tubes, pipetting, mixing, and very close examination of the final result. Kevin held black construction paper up behind the tubes so we could see their DNA strands sprouting up from the brine before our eyes.

There were many exclamations of, “whoa,” “wow,” and, “cool!” It really WAS cool.

They wrote their names on the test tubes and handed them to me for safe transport, and that’s how I ended up with them in my freezer, although that wasn’t the end of our tour. Next stop, clinical laboratory in the hospital.

The robotic arms and conveyor apparatus of the Core Laboratory, which consists of Chemistry, Hematology, and Urinalysis, were quite impressive. The lab runs approximately 4,000 tests per day on patient samples (urine, blood). As Nick put it, “Whoa, that’s a lot!”

We weren’t the only ones impressed that day. We heard, “It’s Doogie Howser!” and “Startin’ ‘em young these days!” as Nick and his lab coat generated smiles and comments in the halls and in the lab. We calculated that if he were to pursue a degree in CLS, he’d probably be in the class of 2030, though they could sure use him sooner.

Since approximately 40 percent of the laboratory workforce is within ten years of retirement, it’s not too early to recruit. The program is always looking for future laboratory professionals to fill this shortage.

According to the Bureau of Labor Statistics, employment of medical laboratory technologists and technicians is projected to grow 16% from 2014 to 2024, much faster than the average for all occupations. That’s a great career opportunity, and I made certain Hilary left with an informational flier! (Nick has a few years of pre-requisites to go.)

Part two will cover our visit to the Anatomage Table.

More about CLS:
CLS is often referred to as the hidden profession that saves lives. The behind-the-scene efforts of medical laboratory professionals can be the difference between life and death for patients.

It is estimated that 70-80% of a physician’s medical decisions on any one patient are a direct result of laboratory test data, and a study done at the Mayo Clinic determined that 94 percent of patient interactions in a given day involve, in some way, work done in the lab.

Read more about these professionals here.

Explore or apply to our CLS program here.