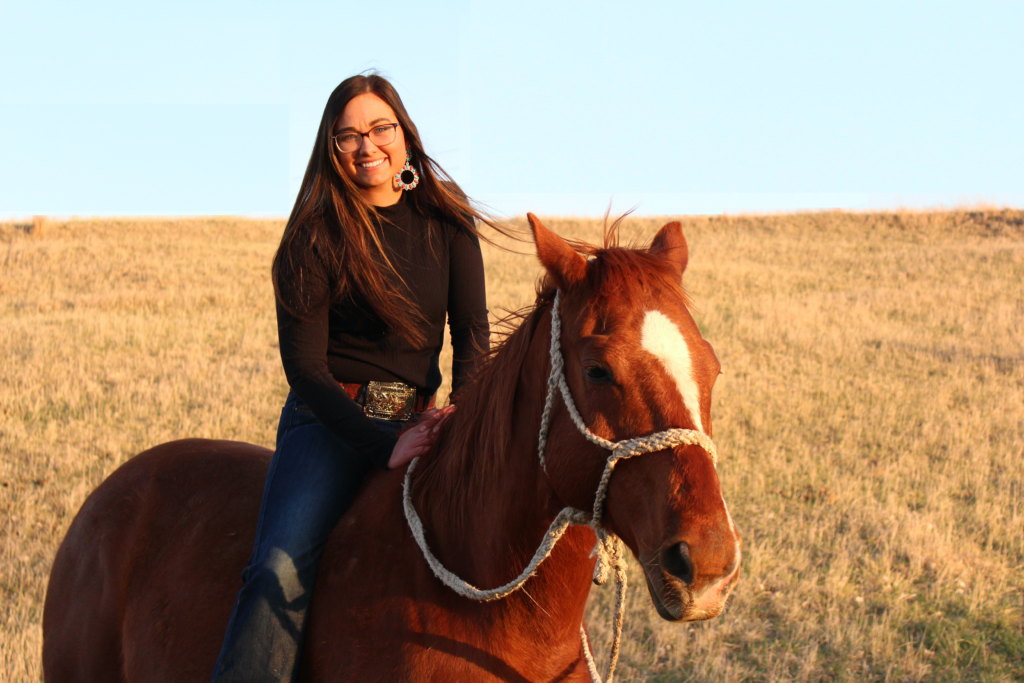 Clancy Hesseltine riding her horse, LeRoy. "The halter on LeRoy is the first one that I ever made, so its special to me, and so is LeRoy."

Occupational therapy student Clancy Hesseltine stumbled onto a new occupation during her first semester at UNMC in Kearney. Let her tell you the story…

I started Hesseltine Halters in my first semester of occupational therapy school as a class assignment for which I had to learn a new occupation. I knew I wanted something unique, useful, and inexpensive. The idea sprang from a large pile of old ropes in my laundry room – I’d make halters by repurposing old ropes! At the time I had no idea it would be something from which I would make money, let alone something that would later pay a lot of my bills.

After my initial idea, I found a brief YouTube video about making halters but out of different materials. When I got home that evening, I unraveled a rope, and started trying things similar to what was shown in the video.

I didn’t even know how to complete a four-strand braid, let alone make a halter, and the first one took me roughly five or six hours to complete. It was time consuming but really rewarding when it actually fit my horse’s head.

A friend really encouraged me and suggested I try to sell my halters. After I’d made the same design for a while, my friend showed me a different halter design she thought was cool. I told her I would learn how to build one for her, and I did.

I laid in bed that night thinking about how I could potentially make the halter, and with an image in my head I made it the next day. After I finished it and showed it to her, she was ecstatic and started posting stories on her social media pages. She promoted my halters in hopes that someone would order a couple from me. Looking back, I am thankful the only people that actually decided to order from me at that time were my friends’ cousins, because a lot of the halters I first built are probably in a trash can somewhere.

The pile of ropes in my laundry room eventually disappeared, so I asked a few of my roping pals if they had any laying around that they would be willing to donate to my class project. It didn’t take long before I had about 25 ropes piled up…not in my laundry room this time.

After a couple months, I built up the courage to create an Instagram account called “Hesseltine Halters.” I wish I would have thought of something a little bit more creative, but oh well. I almost deleted the account after some light teasing from friends and some self-doubt. I kept telling myself it probably wasn’t a great idea.

Soon, though, one of my high school friends messaged me and ordered two halters. I only had the two different designs at that time, the original one I’d learned on YouTube, and the second that I’d made for my friend.

Since I’m in grad school, 12 time-consuming halters was a bit overwhelming. (My classes were also hard and required a lot of studying.) I let people know that I was in OT school and the turnaround time wouldn’t be super-fast, and since the people ordering were just my friends, nobody was too worried about the time that it would take.

After big exams, mainly in anatomy, I would spend the weekend working on braiding the halters to get caught up. If I remember correctly there was a time when I had a list of about 25 halters to make. Each one takes me about 3-4 hours, and I can only make about two per day before my hands get really numb. I eventually got caught up on all of them, and somewhere in the middle, I learned how to make another design.

It’s been about eight months since I started making halters, and to my knowledge only about three have broken. I’ve learned to make modifications to make them more durable and longer lasting. I have also learned the benefits of braiding as an occupation, and how I could relate this new occupation to my work as a future occupational therapist.

In OT school we learn about the doing, being, becoming, and belonging dimensions of occupation. The act of braiding is the doing. Braiding is a wonderful example of a highly repetitive task that promotes finger dexterity, sensorimotor skills, functional cognition, and more. But learning this occupation also taught me about being a creative small business owner, becoming a better version of me, and belonging to a community that was interested in what I had to offer.

Without the use of social media and the support of my friends, there is no way that Hesseltine Halters would be where it is today. In addition to my Instagram account (@clancy_hesseltine), I recently created a Facebook page for Hesseltine Halters, and have gotten a lot of business through that as well. Many of the customers that order from me send me pictures of their horses with their halters on, and without them, my social media pages would be bare.

I have kept a list of names on my phone of people who have ordered from me, and how many they ordered. I am nearing 150 halters! That’s not a huge number, but to me it’s a lot. To start it was mainly just close friends trying to support me trying to start something new, but as time has passed, I have had tons of orders from people I don’t know. I have had many requests from people to build different things, such as riding hackamores, pony halters, and recently, I even built a halter for a big, beautiful draft horse.

Hesseltine Halters has been so rewarding. It was a great way to repurpose old ropes, giving them life again, and it has been a wonderful source of income. These halters have helped pay my rent, in addition to teaching me about social media and marketing, as well as the health-promoting benefits of braiding. (It also cleared out the pile of ropes in my laundry room!) All from an assignment in OT school.

Stacy Smallfield, DrOT, is the Occupational Therapy Associate Program Director and Doctoral Capstone Coordinator who gave the assignment. Dr. Smallfield said, “The purpose of the class assignment is to teach students the therapeutic value of occupation. The profession of occupational therapy exists because we believe in the power of meaningful occupation to promote health and well-being. Clancy’s occupation of braiding halters is the perfect example of this. She learned the value of engaging in meaningful occupation as a means of enhancing her well-being and quality of life. She will be able to better relate to her future occupational therapy clients because of her experience with this assignment.”

One thought on “OT student finds a new occupation in repurposing”