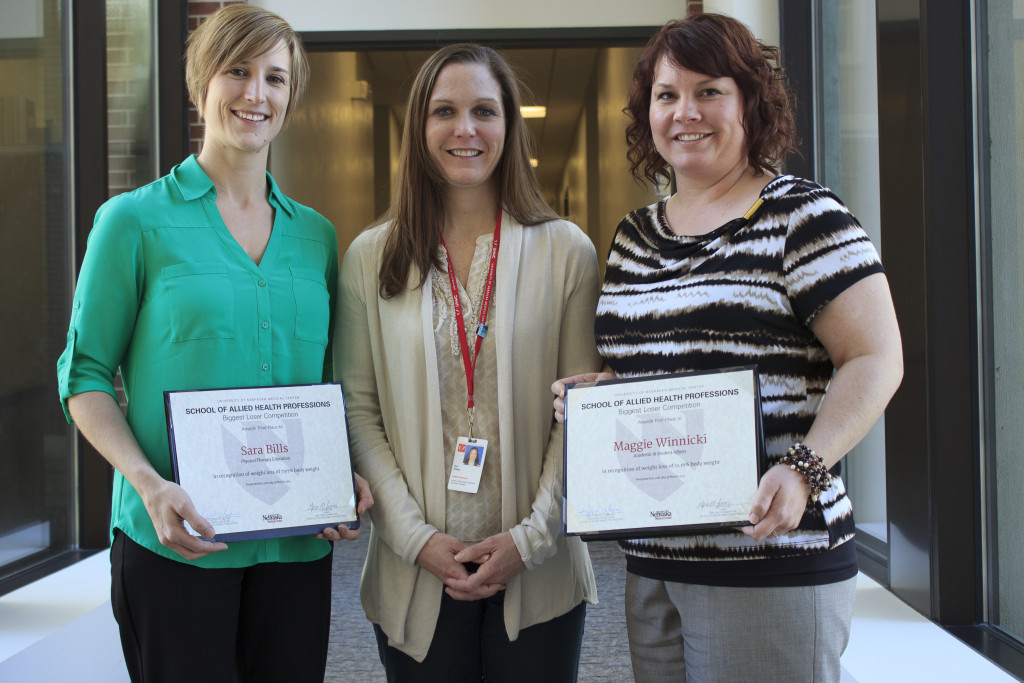 “I’m a terribly competitive person,” Maggie said, “but the truth is, I thought it would be fun. I needed something to jumpstart a healthier lifestyle, and I thought this might do it and it did!”

Kudos, also, to Geri Finn, chair of the SAHP Wellness Committee, who came up with the idea, recruited, and cheered on the participants with weekly emails. “Everyone worked hard,” said Geri, “and made better choices. I am proud of all of them and their efforts!”

There were weekly winners after each of the eight weigh-ins, and then three overall awards. In addition to health and glory, the top three “losers” received a certificate, as well as a monetary prize. Each participant paid a $10 entry fee, which was divvied up according to place. Sara Bills took third and earned back her $10. She lost 7.97% body weight. Greg Karst took second place, receiving $51 (30% of the pot) for his loss of 8.98% body weight. Maggie banked the other $119.

Contact Geri if you have ideas for the next wellness initiative!

Q: How did you do it?
I exercised some, but it was mostly diet. I didn’t want to overwhelm myself with too many changes, and then not stick with it, so I decided to focus mainly on improving my diet. I cut back on the portions that I was eating – I try to stay around 1200 calories/day. But the biggest change was what I ate. Cutting calories is great, but if you eat 1200 calories of garbage, the end result is the same. I started eating vegetables again! I try to have large portions of vegetables, and add fruit and lean meats to the mix. Additionally, I try to eat foods that I buy fresh or make myself. I feel so much better even my skin and hair are healthier!

Q: What was your best motivator?
The kind words of encouragement from my co-workers were really great. Geri is an awesome motivator, and always kept me on task! But everyone was really great about encouraging me, and that just made me feel good. I knew I was making my husband and kids proud as well, so that was the motivation I needed to stick with it.

Q: What’s next?
I think after nine weeks, I have finally made my new dietary choices a habit, so I’m ready to throw in a good exercise routine. Starting next week, I plan to start walking the stairs again in the Lied, and ramp up my workouts at home. I won’t be running any marathons, but walking 3-4 miles/day on the treadmill and strength training are in the plan. I have reached 1/3 of my goal, so I still have a journey in front of me, but I am committed to getting there!

Q: Best takeaway from the experience?
This was a lot of fun! I think it really built some camaraderie between those of us who participated, and a fun topic of conversation even for those who didn’t. Several of the participants “friended” each other through various health apps, like Fitbit and My Fitness Pal, so they could encourage (and taunt) each other electronically. I think everyone who did it, whether they reached their goal successfully or not, will admit that they had a good time, and enjoyed the experience that makes it a success in my book!