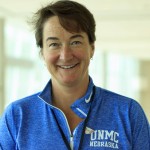 As of May 1, 2014, Stephanie Lough, BS, R.T.(R)(MR), assumed the position of Clinical Education Coordinator in the Magnetic Resonance Imaging (MRI) program and the CT Practicum of the School of Allied Health Professions. Stephanie received her Bachelor degree in Radiation Science Technology from UNMC. She is a licensed medical radiographer and holds American Registry of Radiologic Technologists (ARRT) certifications in both Radiography and Magnetic Resonance Imaging.

Stephanie has been employed as an MRI technologist at the Nebraska Medical Center since 2007, and during the past year she served as an Adjunct Instructor for the SAHP MRI program. She’ll retain some clinical responsibilities as part of her new role.

A little known fact: Stephanie is responsible for Elephanto! She brought him to a “white elephant” party a few years back, when she was a radiography student, and I, Fran, ended up with him. He became a sort of mascot for a while when I started this blog. Thanks for the inspiration, Stephanie, and welcome aboard! 🙂