At the 2013 U.S. Figure Skating Championships 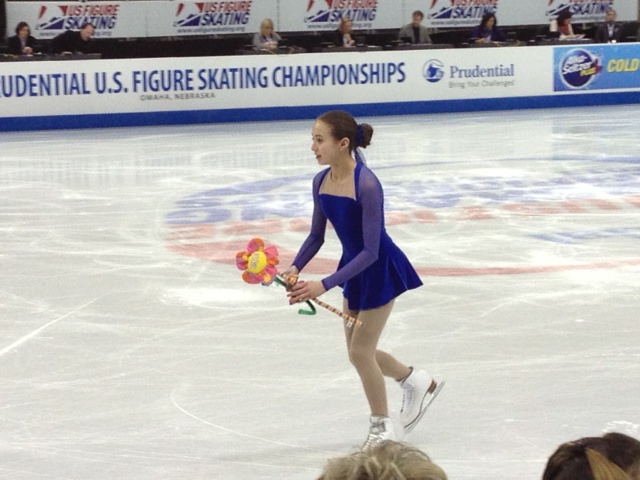 Some of us were lucky enough to attend the U.S. Figure skating Championships held in Omaha, January 21-27, 2013. Eva Donnelly (12-year-old daughter of Robert and Amber Donnelly, Director of the Cytotechnology Program) was chosen to be a sweeper for the event. Sweepers are the skaters who pick up the stuffed animals and flowers thrown by fans to the ice for the skaters. This special job allowed Eva a close-up view of the skaters performing on ice and to personally meet many current and former skaters (see photos at the bottom of this post).

Eva has been skating since she was nine. She practices approximately 6-8 hours on-ice and 4-5 hours off-ice each week. Dedicated, she gets up as early as 4:30 a.m. for lessons before school. Being there for the championships was an inspiration for her to keep skating and achieving her goals.

Eva’s mother, Amber, volunteered for many jobs during the week-long event. Her duties consisted of being an Ice monitor (checking in skaters and monitoring their time on the ice), dressing room monitor (allowing only appropriately credentialed persons into the dressing rooms) and assisting with accreditation / credentialing (creating the ID badges for skaters and their families, coaches, vendors, media, and volunteers).

It was an experience they won’t quickly forget.