Mike Huckabee and Karen Wesche were at Base Borden just north of Toronto, Canada a few weeks ago to attend the graduation ceremonies for PAs training in the Canadian Forces military. The PA Program representatives greeted the newly enrolled Canadian PA students, and met with instructors and base leaders about the Canadian Forces PA Program. Huckabee and Wesche were given honor seating as the military PA troops were inspected by the Canadian Deputy Surgeon General, followed by the presentation of awards including a PA student who received the Canadian Medal of Sacrifice (equivalent to an American military Purple Heart). The military held an afternoon graduation ceremony where 23 graduates received a BS of PA Studies degree and 4 graduates received a MPAS degree from UNMC, presented by Huckabee and Wesche. The evening culminated with a magnificent “Mess Dinner” including a 5-hour, 4-course meal with all military personnel in full military formal dress. 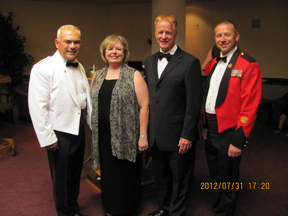 Mike and Karen at the “Mess Dinner” with Commandant Plourde and Captain Martin (PA Program Director.