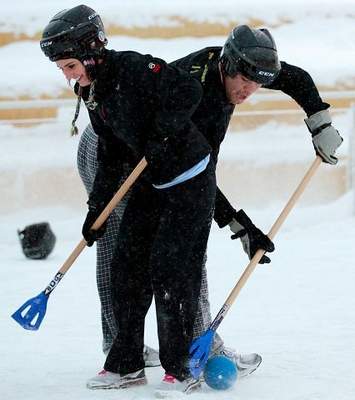 Courtney Petersen, Kelly Cole, Ryan Zavala, and Cole McCallum (pictured), students in the Clinical Perfusion Education Class of 2013, were part of eight teams of UNMC students who squared off in a Broomball Tournament during the UNMC Spirit Week at the Ice Rink near 42nd Street and Dewey Avenue on Thursday, December 8. They placed second in the tournament! This photo appeared in the World Herald. Congratulations!

One thought on “Perfusion students take second in broomball”