Dr. Mathews, a man for all (sports) seasons 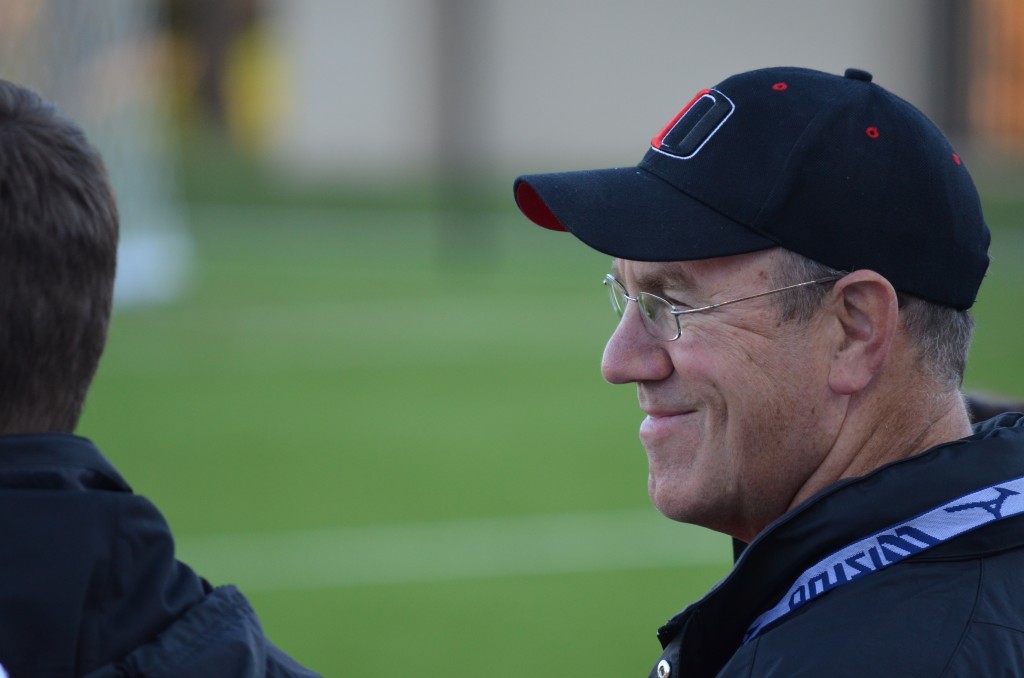 The doc is on duty on a soccer sideline, Caniglia Field, on the UNO campus. He stands with trainers, with coaches, with players (the subs), looking out onto the field. On the green faux-grass, Division I college soccer is being played, bodies slamming, tendons straining, lungs screaming. Mastodons vs. Mavs.

A young boy, wearing a Jr. Mavericks soccer jersey, also was there on the sideline as a special treat. “I didn’t know sports teams had doctors,” the boy said.

As long as Dr. Mathews has anything to say about it, they do.

And he spends a good deal of his free time making sure that they do.

“It’s my passion,” he said. “My hobby.” His real job is here at UNMC, but this is how he spends his weekends and nights.

And thanks to the season we’re in, his volunteer workload is heavy on UNO men’s and women’s basketball and hockey.

And when the minor-league football Omaha Nighthawks were in business, he was on their sideline, too.

These days, more and more sports teams are entering into partnership relationships with orthopedic clinics, and that makes sense. A good deal of sports medicine is knees and shoulders, ligaments and bones.

But then, a good deal of it isn’t. And it also makes sense to have a good old-fashioned primary care, family medicine doc there, too.

For instance, all this talk about concussions? “I feel very comfortable evaluating head injuries,” he said. Not every M.D. does.

They all work together, the way Dr. Mathews works with athletic trainers and orthopedic docs.

The Mavericks have a great training staff, in this case, Phil Dennie. Dennie and his fellow trainers could easily handle 95 percent of what might come up during the game. But that five percent left over?

Meaning, he could initially evaluate, diagnose and treat nine out of 10 of the injuries the training staff would ask him to look at. Beyond that, he would ask for assistance from emergency personnel or other specialists if athletes needed to be transported to the hospital for central nervous system, spine, major bleeding or complex orthopedic injuries.

Luckily, at the soccer game, none of it comes up.

But it wasn’t his only appointment of the night. He also was set to be the team doc at the Mavericks’ hockey game down at CenturyLink Center. Would he have to hurry?

Doctors know better than to hurry.

“I’ll have to be efficient about it,” was the way he put it. And he was. After it was over, after the Mavericks had won 4-0, Dr. Mathews double checked with the training staff, to make sure there wasn’t anyone he needed to look at. Then he did the same with the visiting team. And then he was gone. Off to his next sideline. Off to make sure another sports team had a doctor in the house.

4 thoughts on “Dr. Mathews, a man for all (sports) seasons”