This time capsule's all wet 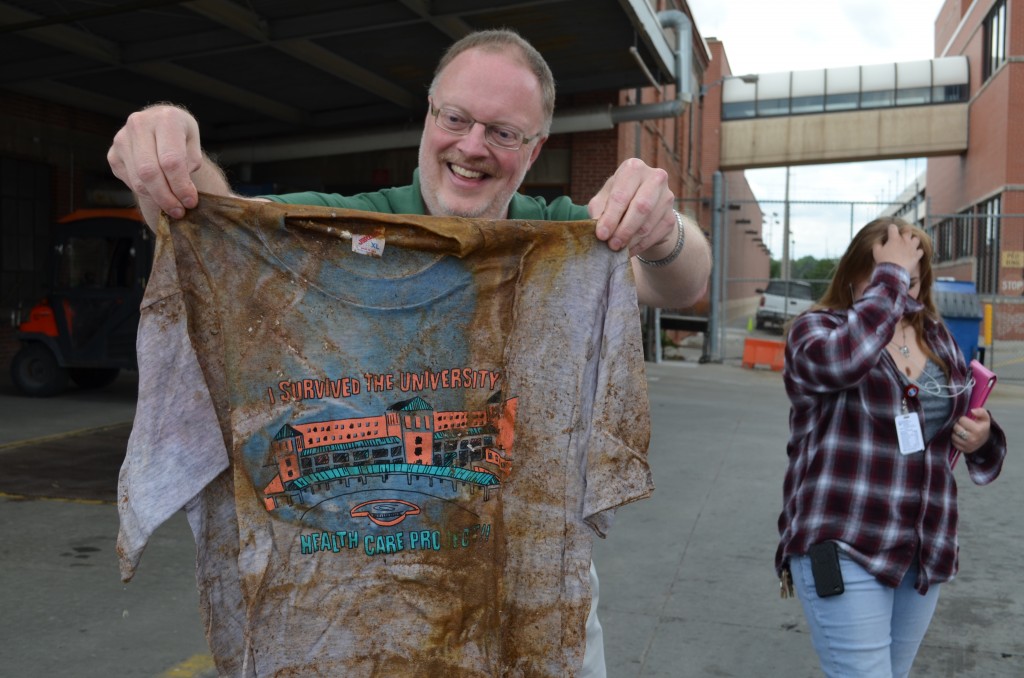 Going all the way back to the days of the tombs of the pharaohs – or at least going back to that time Geraldo Rivera broke into Al Capone’s vault – mankind has been fascinated by time capsules. It’s innate in us: What treasures lie buried which were left by those who came before?

And so it was that a group of us recently gathered in a parking lot, eager to gaze upon the contents of a metal box.

It had been unearthed from beneath Swanson Hall Plaza. The time capsule had been buried and “sealed” (more about those quotation marks in a minute) 20 years ago, on June 3, 1993, just after the Durham Outpatient Center opened in May of that year. But the campus continues to make way for the new cancer center. So, the guys from the UNMC facilities management and planning department had dug it up.

As we walked up, they had the box tilted, and water was draining out.

Ooh. That can’t be good.

“It’s not very pretty,” someone said.

Mud. Water. Muck. Junk. But Schleicher dug in. Someone went to get gloves, but Schleicher couldn’t wait. Then Dickmeyer donned the gloves and got elbow-deep. They pulled stuff from the muck. UNMC shoelaces. College of Nursing playing cards. VHS videotapes, ruined and soaked.

“We couldn’t play these even if we had something to play them with!” someone said.

“That reminds me of a joke,” Schleicher said.

(And suddenly, we find ourselves in a Charlie Sheen-era episode of “Two and a Half Men.”)

But no jokes were required. Everyone had already laughed, at the mere sight of a floppy disc.

There was more. What’s that? “Photos,” Dickmeyer said. “But they totally washed out.”

That’s all that was left.

It was as if someone’s old basement had been flooded – for 20 years.

John Keenan, UNMC Today editor, is a serious journalist. He gets to the bottom of things. What, he asked, was the technical mistake behind what had happened to the time capsule?

T-shirts. T-shirts from 20 years ago, muddy and disgusting and soaked.

Schleicher held them up: “People were smaller back then,” he said, sounding like an archeologist.

Or, maybe cotton shrinks after 20 years in muck.

There was a Pepsi can, eaten through. From the dirty water without, or from the soda within, we’ll never know.

The newspapers were unreadable. The videotapes were unwatchable. The photos may as well have been invisible. The floppy disc was a punch line.

So much for treasures.

And yet … it was still fun. Something about seeing what was left by those who came before.

Schleicher stuffed the shirts into a trash bag, hoping to salvage them with a trip (or 10) through the wash. Dickmeyer tried to brush the muck off his button-down shirt.

We started to disperse, shaking our heads. “Here’s the last line of your story,” Schleicher said: “ ‘And then, they threw everything in the dumpster.’ “