The practice ice rink looks like the graduation area. 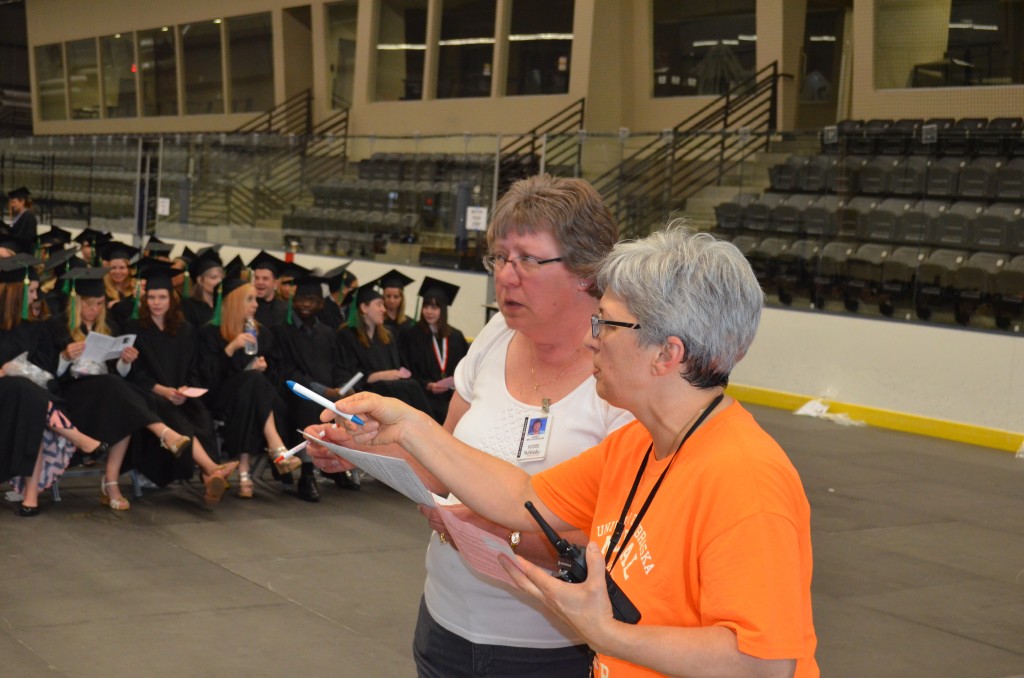 There are rows of chairs for the graduates. There is a podium. There are even seats on one side, though not nearly enough to seat all the friends and family who are expected.

Still, the room looks official enough that one graduate, gown draped over her arm and a cap in one hand, asks “Is this where the ceremony is?”

UNMC’s official commencement ceremony was held May 10 at the Ralston Arena, on the main floor, where the Lancers hockey and UNO basketball games take place. This room, a practice area located just below and behind the arena gift shop, was the staging area, where, a half-hour before the ceremony starts, Barbara Breazeale and Janet McLaughlin are trying to wrangle more than 450 graduates.

Right from the start, some tweaking is needed. The seats have been sectioned into areas A and B, but the signs have been switched, so the students who have actually taken their seats – by college and in alphabetical order – are all in the wrong place.

“We always have interesting things pop up,” Breazeale said.

As the two consult lists – who is here, and who isn’t coming, and who’s supposed to be coming but hasn’t yet? – the students gather in groups, pose for photos and adjust their caps and gowns. The clear fiberglass that would serve as protection for the audience during hockey practice doubles nicely as a reflective surface, where hair can be checked or makeup fine-tuned.

“I’m a non-traditional student,” Warner said. “I’m 41-years-old, and this is the completion of my first bachelor’s degree. Getting that degree in my hand means everything.”

Rob Bowen is getting his M.D.

“Graduation is a good opportunity for our family to come and see us,” he said. “It’s the end of something, but it’s the beginning of a lot.”

Ernie Sigler, D.D.S., and John Reinhardt, D.D.S., are lined up in a hallway behind the arena floor, academically garbed and waiting to make the walk into the main arena. The two are smiling as they talk to each other, obviously happy to be part of the Omaha ceremony, as well.

“They work so hard, it’s almost like they can’t believe it’s over,” said Dr. Reinhardt, “It’s great to assure them that they’re ready to face the world, and it’s great because we get to see their parents again – to have them come for a special celebration like this is really nice.”

By 9 a.m., everyone in the practice rink is ready. McLaughlin and other Student Services staff have the students seated in the proper sections and in alphabetical order by school. No-shows have been identified. It’s go time.

At the signal, the graduates rise and, behind two red-garbed marshalls, they troop out of the practice rink.

From the arena floor – from the real graduation area – the music starts.