There and Back Again (and again, and again…)

It happened somewhere between mile markers 379 and 380, heading east toward Lincoln.

A noteworthy milestone in the life of the HEROES project after another great trip out the panhandle, working with students from both UNMC’s College of Nursing and Western Nebraska Community College.

It’s like we drove to Scottsbluff and back 83 times. Which, if you assume a seven hour drive time, would take you 581 hours to achieve. And, as anyone mathematically inclined can tell you, that’s a smidge over 24 days. Fortunately, it’s not been all Interstate miles (not that there’s anything wrong with that).

I could list all of the places we’ve been during those forty thousand miles, but I fear that it’d end up sounding like a bad Johnny Cash song. Instead, I’ll just leave the map below and let you explore our destinations (some of which we’ve graced multiple times with our presence) at your own pace. 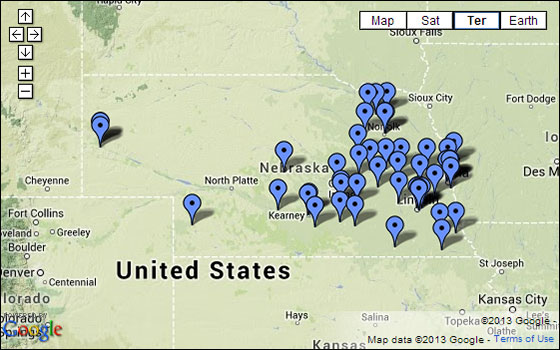 And yes, North West Nebraska is a bit sparsely represented at the moment. Hey! Alliance, Chadron, Gordon, Valentine – get in touch, we’d love to help out in any way we can with your emergency preparedness training and exercise plans.

So where are we going next? Norfolk (twice) and Kearney before the year is out. However, before those, on Saturday we head out to the APHA’s annual meeting in Boston, MA. By plane.

HEROES on the Internet
Archives
Meta