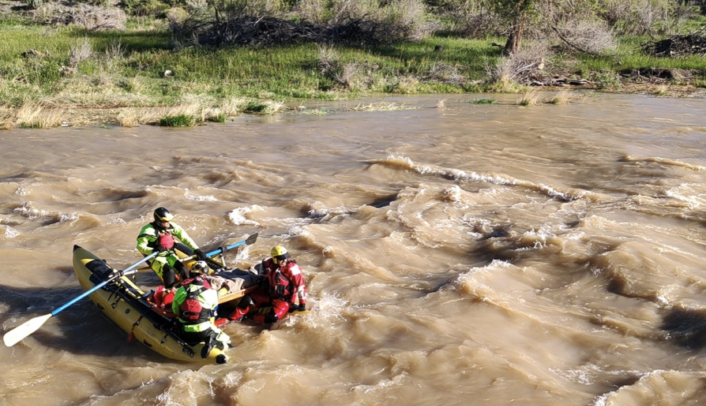 First responders participate in an exercise simulating the rescue of a patient in the Shoshone River, Wyoming.

Online Applied Practice Experience (APEx) student, Elise Lowe, MD, has been recognized in her community for work related to her APEx project.

The project includes both tabletop and full-scale exercises designed to test policies, meet regulatory requirements, help develop processes and build camaraderie between local, state and federal agencies. So far, the exercises have included a full-scale mass trauma drill, a cyber attack tabletop and a measles tabletop with the local hospital.

“I am very passionate about emergency preparedness and am deeply involved in the first responder and regional healthcare response communities. My APEX project has given me the structure, mentorship and directed time to learn and fill a large immediate need for my community. It has been so rewarding to discover ways that we can be truly prepared for chaotic situations that most people just hope never happen.

Elise said it’s rewarding to be around people who are just as excited and passionate about emergency preparedness and to work with them to conduct these exercises. But it hasn’t come without its struggles.

“The most challenging part of my project has been engaging the people whose expertise is required. My preceptors have been phenomenal but sometimes we need subject matter knowledge from people in specific fields who legitimately believe that critical events could not happen to them. It is challenging to be in the position of trying to first convince someone to accept the possibility of catastrophic failure before you can help plan a response.”

Seeing how UNMC helped when COVID emerged made her choose to pursue her Master of Public Health at the College of Public Health. She said using many of the tactics and evidence-based recommendations released by UNMC in her professional career made the decision an easy one.

“I chose to study at UNMC College of Public Health after using many of the tactics and evidence-based recommendations published during Covid. As a physician and member of my hospital’s ICS team, we were trying to make decisions with essentially no expertise in infectious disease response. UNMC was the first and often only institution willing to implement and publish ground-level response tactics. Deciding to pursue my MPH here feels like going straight to the mothership. I have not been disappointed and it has been an honor to become part of this community.”

Elise said the the support she has received both academically and personally has exceeded her expectations. During her studies she has also completed her American College of Tropical Medicine and Hygiene Certificate and is working to complete a hands on experience and deploy with a National Disaster Medical Assistance Team (DMAT) by the end of the year.

“I’m not sure where my career will go but thanks to UNMC I feel confident in the skills I can bring.”