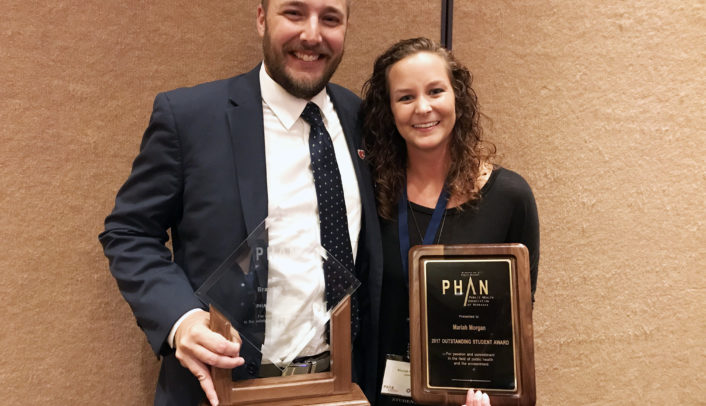 Public Health Practice – The 2017 Public Health Association of Nebraska (PHAN) annual conference was held on September 21 and 22 in Lincoln, NE. This year’s theme was Public Health 150: Opportunities for Innovation, Advocacy, and Action.

Over 20 students, staff, and faculty from UNMC COPH attended the conference. Abby Hughes, MPH student, described it as, “Very engaging! I enjoyed learning about different public health efforts across the state and nation as well as networking with other public health professionals.” Students, faculty, and alumni also moderated and presented breakout sessions and posters.

Day one of the conference focused on communication and messaging.

The opening general session detailed the importance of crafting stronger public health messages. Gene Matthews, JD, Colleen Healy Boufides, JD, and Sue Lynn Ledford, DrPh, discussed the usefulness of using Haidt’s Six Moral Foundations (Haidt, The Righteous Mind, 2012) when crafting a public health message. The speakers shared examples from North Carolina of success in working across professions and sectors. Ledford specifically encouraged working with those seen as competitors or “enemies” and to expect to be surprised, because there is often more common ground than anticipated.

Thursday closed with a legislative panel. The panel was moderated by former Nebraska state Senator Greg Adams and included Senators Sue Crawford (District 45), Mark Kolterman (District 24), and John Stinner (District 48). The senators were candid regarding the state budget, uncertainty regarding numerous health policies and agreed that these are tough times for public health. However, public health must continue to build personal relationships with elected officials through a variety of channels, particularly during this fall season before a new session begins. They all emphasized that many elected officials do not do not know what public health is, so we must educate them, which begins with building a relationship and trust.

Day two of the conference focused on innovation.

Jessica Solomon Fisher, Chief Innovations Officer at the Public Health National Center for Innovations, opened day two, highlighting that innovation in public health does not necessarily mean new technology, but rather new processes, policies, products or programs that increase quality, impact, and efficiency. Additionally, no matter the program or change, the user must always be kept in mind to ensure a positive outcome. And, “we should not be afraid of taking risks due to the chance of failure, as long as we learn from it,” said Solomon Fisher.

The conference was closed by APHA president, Thomas Quade. President Quade focused on addressing the social determinants of health, and the need to travel upstream to determine the causes of poor health outcomes, instead of trying to treat the disease after the fact. To be successful, we must be creative in finding partners to help accomplish the goal because the “typical” public health or health care partners are not always sufficient. He also emphasized that it is important to examine issues from the perspective of multiple communities because everyone does not have the same problems and not everyone is impacted in the same way.

This entry was posted in Public Health Practice, The GroundBreaker, Vol. 7/ Is. 06, Sep 2017. Bookmark the permalink.