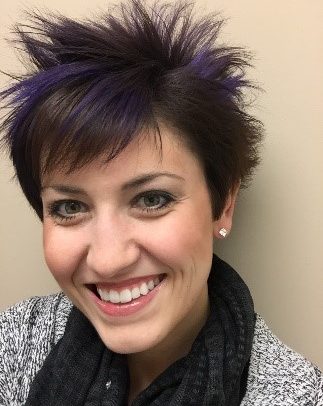 Current career position: Jenny Sharrick’s journey towards a career in public health was accidental and unexpected. Growing up in Hastings, Nebraska she worked on health promotion in areas of food insecurity, poverty, sexual health and hearing health, but formal training was never something she had considered. Jenny began her time at COPH with the Maternal and Child Health certificate program and eventually graduated in December 2016 with an MPH in Maternal and Child Health. She currently works for FAMILY, Inc. a Title V agency in Council Bluffs and supervises the maternal, child and adolescent health programs for two counties in Iowa. Jenny also coordinates the 1st Five Program for two Iowa counties. 1st Five is an Iowa initiative working with primary care providers to identify children 0-5 years old who may have developmental delays because of biological or psychosocial reasons. This initiative assists families in getting services to allow their children to grow to be the healthiest they can be.

The most valued thing about COPH program: Jenny utilizes the skills she learned at COPH on a daily basis. Whether it’s grant application and management, discussions on health equity or working in interdisciplinary groups across Council Bluffs to best serve moms and babies, there isn’t a day that she doesn’t draw on the knowledge base from her coursework.

One of the most pivotal experiences of her time at UNMC was her association with the do juSTIce project. This project allowed her to continue her passion for sexual health education, motivated her last-minute switch into public health, gave her opportunities for leadership development, travel, publishing and even provided the data for her capstone project. She says she learned more from the inmates and staff at Douglas County Jail about social determinants of health and the complexities of the healthcare system than she ever could from reading a book or listening to a lecture.

Advice for current students: Take advantage of every single random opportunity at COPH. Join a service learning organization, go to Grand Rounds, eat the free lunches, do something interprofessional—those opportunities mean more than some of the class time. They allowed Jenny to forge connections to current colleagues and expand her mind to new ideas and ways of thinking which have served her well in the professional world. She says, “Get into the world and do the work with actual people as early and as often as possible. You’ll be a much better public health practitioner because of it.”

This entry was posted in Alumni Highlight, The GroundBreaker, Vol. 7/ Is. 01, Jan 2017. Bookmark the permalink.