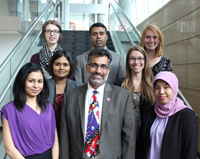 Student Highlight– UNMC College of Public Health (COPH) students who received scholarships and awards, made possible by generous donors, were recognized at the COPH Awards Ceremony on April 15, 2015.

The Carruth J. Wagner, MD, Scholarships in Public Health recognizes regularly enrolled, degree-seeking COPH students in good academic standing who clearly identify their career goals, their potential for contributions to the field of public health, and their views of public health challenges, and how their leadership in public health may meet those challenges.

The Chancellor Robert D. Sparks, MD, Public Health Student Research Award recognizes full-time COPH students in good academic standing who are enrolled in a master’s or doctorate program and have defined a public health research project that demonstrates disease prevention and health promotion through public health education, research, and/or practice, with particular attention to the needs of Nebraska and its citizens.

Patte L. Martin Scholarship recognizes MPH students enrolled full time within the COPH with preference is given to students who are the first to attend either an undergraduate or graduate institution.

Trisari Anggondowati, Doctoral student in the Department of Epidemiology was awarded The Carruth J. Wagner, MD, Scholarship in Public Health.

During her studies in the COPH Trisari has had the opportunity to gain knowledge and work experience in cancer research. Cancer is actually a new field for her, as her previous work in Indonesia, her country of origin, was in maternal and child health. Trisari has enthusiastically learned about cancer research, particularly lung cancer. As an international student, she has had many exciting experiences while studying abroad. Trisari enjoys working in new environments and appreciates both administrative and field work.

Sarah Aurit, Master of Public Health student in the department of Biostatistics was awarded The Carruth J. Wagner, MD, Scholarship in Public Health.

Sarah Aurit, a Nebraska Regents Scholar,  received her BS in Civil Engineering from the University of Nebraska-Lincoln.  Sarah worked for Black & Veatch as an engineering consultant in Kansas City, KS designing and assisting in the construction process of wastewater treatment plant components. Recently she worked with Nebraska families and state legislators to advocate for and pass LB 254. This bill provides treatment for children with significant gastrointestinal illness. The bill passed unanimously during the last week of the 2014 session.

Aastha Chandak holds an undergraduate degree in Pharmaceutical Sciences from India. She has worked as a graduate assistant in the Department of HSRAP since she joined the program in Fall 2012. During this time, she has been involved in faculty projects related to health care workforce, access to care, quality of care and outcomes research. During the last three years, she has published two policy briefs, two first-author manuscripts, and co-authored three more manuscripts. Aastha has also served as a teaching assistant for two courses where she was involved in curriculum design, preparing lecture materials and assignment grading, both in the in-class and online learning environments. Her research interests include access to care and technological innovations, and her dissertation topic will focus on innovations in US hospitals.

Niodita Gupta received her MD from Saratov State Medical University, Russia and her MPH in Health Policy and Management from University of Georgia. Niodita decided to pursue a career in public health after observing contrasts in the healthcare systems in India and Russia. Her research interests include maternal and child health, access to health care, improving health outcomes, quality improvement, and health disparities. After graduation, Niodita plans to pursue a career in research implementation and impact to improve access to health care and health outcomes in the US and globally.

Katelyn Jelden, Master of Public Health student in the Department of Environmental, Occupational, and Agricultural Health (EAOH) was awarded the The Carruth J. Wagner, MD, Scholarship in Public Health and the Patte L. Martin Scholarship.

Katelyn Jelden of Minden, Nebraska, graduated from the University of Nebraska–Lincoln with a degree in biological sciences. Katelyn works as Graduate Research Assistant for the Nebraska Biocontainment Unit and the Department of EAOH. Her research interests include environmental infection control, highly infectious patient care, outbreak response, and emergency and bioterrorism preparedness. Katelyn is involved in Bridge to Care, a UNMC refugee health project; the College of Public Health Student Response Team; UNMC Student Senate; UNMC Interprofessional Society; and the College of Public Health Student Association.

Molly McCarthy earned her Master of Public Health from the College of Public Health at the UNMC and a Bachelor of Science in Sociology and Anthropology from University of Nebraska Omaha. Molly’s decision to pursue an MPH and PhD in Public Health was inspired by an undergraduate anthropology class that focused on health disparities. Her areas of research interest include sexual and reproductive health, particularly family planning policy. Molly is looking forward to presenting at the 2015 Psychosocial Workshop prior to the Population Association of America annual conference in April.

Mariah Rakestraw is a 2013 graduate of Blair High School in Blair, Nebraska. At the University of Nebraska-Omaha, she has assisted in research related to aquatic toxicology. Mariah plans on pursuing research in environmental health. She has a passion for animals and has volunteered at the Omaha’s Henry Doorly Zoo and Aquarium for ten years.

Kate Rieke, Doctoral student in the Department of Epidemiology was awarded The Carruth J. Wagner, MD, Scholarships in Public Health.

Kate Rieke received her MA in counseling psychology from the Adler School of Professional Psychology and her MPH with a concentration in epidemiology from Loyola University Chicago before coming to UNMC. Her research interests focus on the psychological and social epidemiologic factors that influence morbidity and mortality associated with chronic illnesses. Her dissertation work surrounds the psychological aspects of head and neck cancer, specifically the role of depression in head and neck cancer diagnosis and treatment outcomes.

Raees Shaikh is registered medical practitioner in India and has worked as a physician before coming to the US for his graduate education. Raees earned an MPH degree from  Missouri State University.  He has worked as a graduate assistant for the UNMC COPH Service Learning Academy and as a teaching assistant for the COPH applied research methods course. He is currently working as a research coordinator for an NIH-funded research project examining effects of point of sale tobacco marketing on smoking cessation.   He served as the doctoral student representative on the COPH Curriculum Committee and Evaluation Committee.

He Zhu, Doctoral student in the department of Health Services Research, Administration and Policy was awarded The Carruth J. Wagner, MD, Scholarships in Public Health

He Zhu received a bachelor’s degree in Economics and a Master’s degree in Management (Social Policy Concentration) from Beijing Normal University. Her research interests are health economics, health services research and traffic safety.

This entry was posted in Research, Student Highlight, The GroundBreaker, Uncategorized, Vol. 5. / Is. 03, May/Jun 2015. Bookmark the permalink.