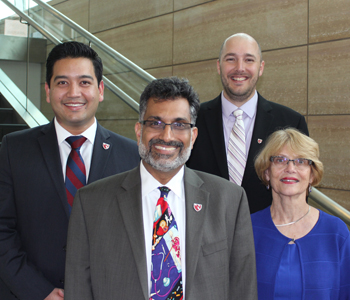 Dr. Armando De Alba Rosales is an Instructor in the UNMC COPH Department of Health Promotion, Social, and Behavioral Health. He received his medical degree from the Autonomous University of the State of Puebla, Mexico and is currently an active primary care physician in the State of Veracruz. Dr. De Alba received his Master’s degree in Public Health at the University of Nebraska Medical Center. He was a national Health Disparities Fellow for the U.S. Food & Drug Administration (FDA), Office of Minority Health and worked at the Mexican Consulate as lead coordinator of the health care programs for the Mexican communities of Nebraska and Iowa. In 2014, he was appointed by the Mexican government to become the founder of the Nebraska/Iowa chapter of the Global Network of Qualified Mexicans Abroad.

Dr. Brandon Grimm is the Director of the Office of Public Health Practice and Instructor in the Department of Health Promotion, Social & Behavioral Health.  He was the co-creator of the first ever public health leadership development program in the region and has been instrumental in its sustainability for the past ten years.  Dr. Grimm led the effort in securing funding to establish a Health Resources and Services Administration Public Health Training Center at the College of Public Health.

Dr. Grimm serves on numerous boards and committees including the Nebraska Community Health Worker Advisory Board, the Nebraska State Health Improvement Plan Implementation Committee, and the Region VII American Public Health Association Affiliate Committee. He is currently the president elect of the Public Health Association of Nebraska, President of the UNMC Chapter of Delta Omega, and is a past recipient of the Balderson Award from the National Public Health Leadership Development Network.

This entry was posted in Public Health Practice, The GroundBreaker, Vol. 5. / Is. 03, May/Jun 2015. Bookmark the permalink.