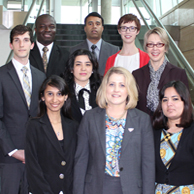 Student Highlight – College of Public Health (COPH) students were recognized at the Annual Awards Dinner for receiving competitive scholarships funded by generous donors to the college.

The Carruth J. Wagner, MD, Scholarships in Public Health recognize regularly enrolled, degree-seeking COPH students in good academic standing who clearly identify their career goals, their potential for contributions to the field of public health, and their views of public health challenges, and how their leadership in public health may meet those challenges. This year’s recipients are shown below.

Sarbinaz Bekmuratova earned her master’s degree in community health at Minnesota State University through an Edmund Muskie Fellowship. Her interest and career path in public health started from involvement in projects on HIV/AIDS and tuberculosis in local and international public health organizations in her home country. Her research interests include policy analysis, maternal and child health, health disparities, and global health. After graduation, she plans to continue her involvement in research on maternal and child health, and to implement public health interventions in developing countries.

Jeri Brittin holds degrees in mathematics, music, and interior design. Before returning to school for formal design training, she held senior-level marketing and management positions. Her research interests lie at the crossroads of design and health: (1) Exploring and bridging the translational gap between scientific research and design practice; (2) Hypothesizing and testing the effects of theory-based built environmental interventions on population health outcomes; and (3) Expanding methodologies to predict, measure, and evaluate the impact of place-based health initiatives. She believes that changing environmental determinants of health is key to minimizing health disparities across diverse populations. Ms. Brittin is passionate about engaging the design and planning professionals who mold our environments in the work of promoting health. She intends to build an academic career in which she conducts research, teaches, and consults on health-outcomes oriented environmental design.

Dr. Han has both an MD and PhD in clinical rheumatology and has spent the past several years working in China as a physician in the field of rheumatology. In 2011, he received his master’s degree in biostatistics. Dr. Han became interested in epidemiology because of the many chronic diseases, such as diabetes and heart disease, that are preventable by eating a healthy diet, being physically active, and avoiding tobacco. His solid background and research achievements in the biomedical and medical fields, his academic experiences, and his practical skills in biostatistics and epidemiology will help him to achieve his career goal to become an epidemiologist specializing in chronic disease.

Molly McCarthy earned an MPH from the College of Public Health at UNMC and a bachelor of science in sociology and anthropology from the University of Nebraska-Omaha. Molly decided to pursue an MPH and PhD in public health after learning about health disparities in an undergraduate anthropology class that focused on health disparities. She is interested in aspects of tobacco marketing, such as the impact of tobacco marketing on youth imitation of tobacco products and perceptions of risk. Other areas of academic interest include sexual and reproductive health and LGBT populations.

Samuel Opoku received his bachelor of science and MBChB degrees from Kwame Nkrumah University of Science and Technology, Kumasi, Ghana. His research interests are in health care workforce and related policies. He has successfully conducted and published studies in this area. He plans to work in academia after his training and to return to his home country within the next decade to contribute to the improvement of public health.

Ketki Patel received her MD from Vitebsk State Medical University, Republic of Belarus, and her MPH in environmental and occupational health from the College of Public Health at UNMC. She worked as a medical doctor in Belarus and India before coming to the United States. She has worked on several epidemiology projects ranging from occupational lung disease to molecular gut microbiology in preterm neonates. Her current research focuses on identifying agricultural health and safety education needs, estimating incidence of non-fatal agricultural injuries, and evaluating risk factors of non-fatal agricultural injuries in the Central States region using novel non-fatal agricultural injury survey data linked with US Census of Agriculture data. She serves as the secretary of the COPH Student Association, a student representative on the COPH Research & Development Committee, and a COPH representative on the UNMC Interprofessional Society. She aspires to be an academician and to continue occupational health and safety research in the United States and globally.

Muna Sapkota received her elementary and high school education from St. Mary’s High School in Nepal. She attended the School of Pharmaceutical and Biomedical Sciences at Pokhara University from 2002 to 2006, majoring in pharmacy. She attended the School of Pharmacy at Catholic University of Daegu, South Korea, from 2008-2010, where she obtained a master of pharmacy degree. In April 2010, she came to the United States as a research scholar at Creighton University. Presently her research is focused on the identification and quantification of malondialdehyde, a component of the oxidative stress caused by cigarette smoke inhalation and ethanol consumption. After completion of her PhD degree, she plans to work as a postdoctoral fellow.

Raees Shaikh is a third-year PhD student in the Health Promotion and Disease Prevention Program in the UNMC College of Public Health. He is native of Aurangabad, about 200 miles east of Mumbai, in the Maharashtra State of India. He is a registered medical practitioner in India and worked as a physician before coming to the United States for his graduate education. He earned an MPH degree from Missouri State University. He is fluent in three additional languages besides English. In his free time, Raees enjoys spending time with his family.

Olivia Sonderman is a 2011 graduate of Scotus Central Catholic High School in Columbus, Nebraska. She is a junior majoring in global studies and pre-medicine with Spanish and mathematics minors. At UNL, Olivia is founder and current executive member of the Humanities in Medicine Organization, and she has researched chloroviruses in a plant pathology lab for two years. She also serves as an AmeriCorps member at the People’s City Mission Free Health Clinic in Lincoln. Olivia plans on becoming a doctor, with a focus on providing quality health care to underprivileged people in the United States. Specifically, she would like to implement public health programs that educate refugees on preventive health care and wellness. She enjoys spending time with friends and family, playing soccer, traveling, and playing guitar.

The Chancellor Robert D. Sparks, MD, Public Health Student Research Award recognizes full-time COPH students in good academic standing who are enrolled in a master’s or doctorate program and have defined a public health research project that demonstrates disease prevention and health promotion through public health education, research, and/or practice, with particular attention to the needs of Nebraska and its citizens.

Jonathan Ali is originally from Dayton, Ohio, where he obtained his bachelor’s degree in biological sciences at Wright State University while working at Children’s Medical Center of Dayton. His research interests are in public health and the environment, specifically the health effects of environmental contamination and pollution.

This entry was posted in Student Highlight, The GroundBreaker, Vol. 4 / Is. 05, May 2014. Bookmark the permalink.