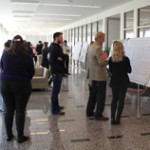 Spotlight on Research at COPH – Kelli Gruber, an MPH student in the epidemiology concentration, received the best poster award for her poster titled “Minimally Invasive Surgery for Colon Cancer.” In her poster summary, Kelli noted the following: “Colorectal cancer (CRC) is ranked third for cancer incidence and mortality in the United States. In fact, mortality from CRC is higher in the Midwestern states than in other parts of the country, which could be attributed to the large number of rural communities in the Midwest. Technological advancements in CRC treatment, including minimally invasive surgical (MIS) techniques such as laparoscopic surgery, have been shown to have equivalent or even superior outcomes compared to the standard surgical treatment. It is currently unknown if this procedure is being utilized for CRC patients diagnosed in Nebraska, if disparities in treatment received exist based on rural/urban residence, and if survival and tumor recurrence vary by type of surgery received (laparoscopic vs. open). The main purpose of the study was to describe clinical and demographic factors associated with MIS for colon cancer treatment. The second aim was to examine predictors of survival (vital status) in patients who underwent laparoscopic or open colectomy as treatment for colon cancer.” Kelli used a linked dataset of Nebraska Cancer Registry and hospital discharge data (HDD) to investigate the research questions. After adjusting for potential confounders in multivariable logistic regression, colon cancer patients who received laparoscopic surgery had significantly greater odds of being alive at last contact than did the standard surgery group. Future analyses will examine predictors of surgery receipt, including rural/urban residence.

Harpriya Kaur, a PhD student in epidemiology, received the best poster award for her poster titled “Is Hypertension Associated with Long Work Hours and Select Workplace Psychosocial Factors? – A Cross-Sectional Study Based on the 2010 National Health Interview Survey.” In her poster summary, Harpriya noted that “Hypertension is a primary risk factor for cardiovascular diseases (CVDs) and stroke and is a leading cause of death in the United States. Many studies have documented the association between the risk factors related to self-reported job stress and CVDs. The goal of this study was to estimate the prevalence of self-reported hypertension, and explore the associations between selected work organization and psychosocial factors (long work hours, job insecurity, work-family imbalance, and a hostile work environment) and hypertension among workers in a nationally representative sample of the US adult population. Prevalence rates of self-reported hypertension among workers in different industries and occupational categories were also examined. Using National Health Interview Survey data for 2010, we found that job insecurity and a hostile work environment were significantly associated with hypertension. In addition, workers in the health support occupational category were more likely than workers in all other occupational categories to report having received a diagnosis of hypertension. One reason why workers in the health support occupational category have higher odds of hypertension could be shift work. Furthermore, we found that workers in the public administration occupational category had a significantly increased prevalence of having received a diagnosis of hypertension. A high proportion of public administration workers are police and firefighters. Studies of firefighters and police have reported strong and independent associations between hypertension and adverse health outcomes such as incident CHD, stroke due to heart disease, nonfatal myocardial infarction, and on-duty fatalities. We recommend that public health professionals and employers consider workplace interventions aimed at reducing the risk factors for hypertension by taking organization-level factors, such as prevention of workplace hostility, into account, along with individual-level health behavioral factors such as diet and exercise.”

Congratulations to Kelli and Harpriya for their award-winning poster presentations at the annual UNMC College of Public Health Student Research Day!

This entry was posted in Research, Spotlight COPH Research, The GroundBreaker, Vol. 4 / Is. 01 Jan, 2014. Bookmark the permalink.