Spotlight on Research at COPH

Timing is Everything
by Alan Kolok, PhD, professor in the COPH Department of Environmental, Agricultural, and Occupational Health 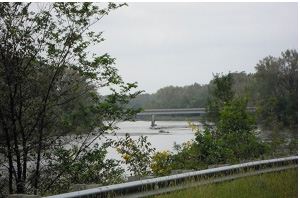 Is bigger always better? In toxicology, the use of enhanced analytical resolution or enhanced discriminatory power defines “large scale” science, giving the researcher greater ability to discriminate between zero and a real value. For example, it used to be that compounds in water could be measured in the parts per million range; now they can routinely be measured in the parts per billion range. However, there is a catch: enhanced resolution is often associated with increased costs, increased sample turnaround time, and reduced sample size. Is the focus on enhanced resolution at the expense of sample size always the most scientifically informative? In Nebraska, the Elkhorn River, a 10,000 square kilometer watershed, is proving to be a valuable testing ground to develop answers to this question.

Our recent research has focused on the presence of atrazine throughout this large and varied watershed. Atrazine is an herbicide commonly used on corn, and its environmental and public health impacts are controversial. In our research, we have recently employed an array of citizen scientists who have blanketed the watershed and conducted atrazine measurements on two different dates. A commercially available atrazine strip test (similar to a pregnancy test kit) was used to provide presence/absence data at 3 parts per billion (the US EPA safe drinking water standard).

On the first day, April 23, over 200 kits were given out to citizen scientists, who were instructed to take a water sample somewhere in the watershed, then record their data on our interactive website. Once the data were accumulated, a map was generated illustrating the locations of atrazine “hits” throughout the watershed. April 23 was apparently too early for most farmers to begin working their fields, and of the 130 responses returned, only 2 were positive.

On the second day, May 21, approximately 120 kits were given out to organizations, such as Boy Scout troops, that were involved in the first sampling period. These groups were instructed to return to the sites where they had previously sampled and sample again. During the second sampling period, rate of return was very high (exceeding 80%) and the map was more interesting. In the upper reaches of the watershed, where wheat, grazing land and cow calf operations predominate, none of the atrazine kits tested positive. However, in the lower portion of the watershed, where corn and soybeans dominate, the map was a mosaic of positive and negative hits.

Bigger is not always better, and the use of citizen scientists in first tier environmental screening represents a valuable source of information regarding environmental and public health concerns.

This entry was posted in Featured Stories, Research, Spotlight COPH Research, The GroundBreaker, Vol. 1 / Is. 02, Jun 2011. Bookmark the permalink.