From the Archives: Medical Technology First Program in Allied Health 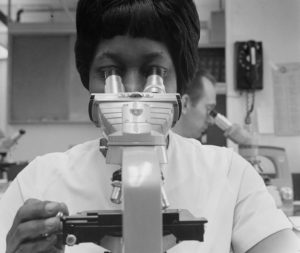 Medical technology (now Medical Laboratory Science) was the first program in the area becoming known as the allied health professions to be started at UNMC.  Several other programs quickly followed.  With the growth of these various programs, a School of Allied Health Professions was formed within the College of Medicine in 1972.  In 1973, the physician assistant program was started, and other new programs would follow in the last decades of the 20th century.

In 2007, Bennett Hall (built in 1918) underwent an $8.9 million renovation (46,000 square feet of space), and in August 2008, all ten of the educational programs of School of Allied Health were finally housed together, for first time ever in one location, having previously been located across the UNMC campus in various buildings.