A Quick Look at Authorship and Contribution Statements

Are authors’ contribution expressed in all journal articles? What control do authors have and when? Do databases convey this information up front?

Author contributions are recognized differently across journals, depending on the policies of the journal publisher. Reputable journals abide by the International Committee of Medical Journal Editors’ (ICHME) recommendations for authorship based on the following criteria:

Authors should expect to see authorship guidelines stated (or referenced) on the “resources for authors” section of reputable journal websites. Near those guidelines should be information describing how journals manage authorship and contributor listings. It is increasingly seamless—in process—to identify authors’ contributions: journals ask for descriptions, forms are filled, boxes are checked, and statements are presented using at least some text from a template.

In the final published version of journal articles, the location and look of author contributions vary. In PLoS journals, a “CO” or asterisk stamp in the author list can contain information about roles and joint or equal authorship. Nature journals also allow one set of up to six co-authors to be specified as having contributed equally to the work; other equal contributions are described in author contributions statements. Cell Press uses footnotes and offers an Author Contributions section to more fully describe each author’s specific contributions.

Journals have been able to adapt to the demand to present contributions, but biomedical literature databases have not. Just this month, PubMed began to make equal authorship information from publisher’s data. The # (pound sign) in PubMed records indicates that authors contributed equally. 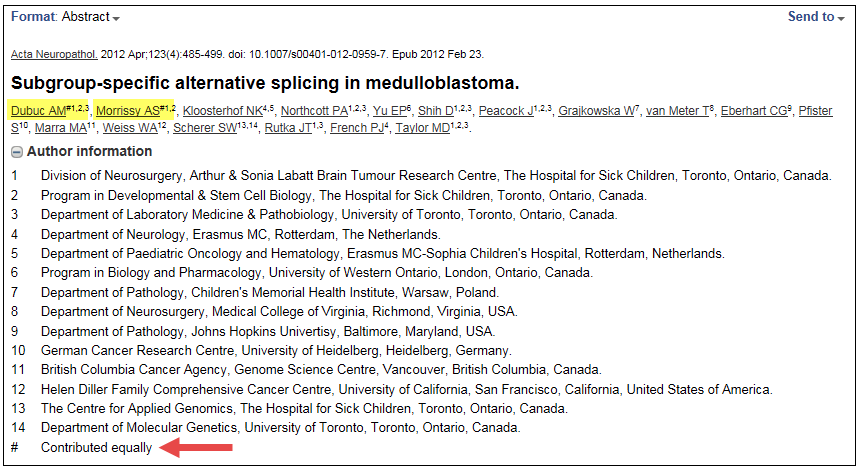 At this time, other major biomedical literature databases, like Scopus of Embase, do not show author contributions at the database record level (other than dual corresponding authors).

The demand for transparency around author contributions in the published biomedical literature goes back at least 40 years.  The ICJME formed in 1978, originally as a group of editors seeking to standardize reference formats. Their work evolved in the early 1980s as they became responsible for the ethical implications of the Uniform Requirements for Manuscripts Submitted to Biomedical Journals (URM). After reckoning with many authorship scandals, the ICJME added a key statement to the 1988 revision of the URM: “Each author [listed in a work] should have participated sufficiently in the work to take public responsibility for the content.” The ICJME continued to improve on this statement in 1991, then again in 1993.

It was only in the mid- to late 1990s that the topic of stating authors’ contributions made its way into the biomedical literature. A 1999 letter to Nature describes a landscape where authors need persuasion to describe their contributions and journals do not necessarily want to ask the question from those submitting articles for publication. Also in 1999, an article states that The Lancet did “courageously require the contributions of each author to be cited in papers.” The author suggested that funding bodies should drive the conversation of contribution and demand for more transparency.

By 2010, there was a significant amount of literature about authorship in biomedical literature. One study reported that that “that the percentage of articles with equal contribution statements has increased dramatically in five top medical journals since the beginning of the 21st century.”(Akhabue and Lautenbach, 2010)  Contributions and credit continue to be studied alongside bibliometrics, the changing nature of the scholarly record, and scholarly networks.