From the archives: Electricity and medicine

The first medical treatments with electricity took place in London as early as 1767 at Middlesex Hospital, using a special device. The same device was purchased for St. Bartholomew’s Hospital ten years later. The record of uses other than therapeutic is not clear; however, Guy’s Hospital in London has a published list of cases from the early 1800s.

In 1856 Guillaume Duchenne, a French neurologist, found that alternating current was superior to direct current for electrotherapeutic 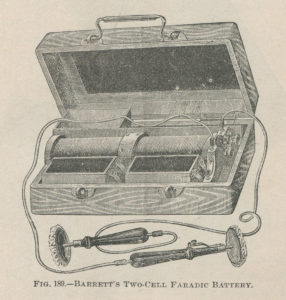 The device shown here is Barrett’s two-cell faradic battery, which is very similar to a late 19th century electrotherapeutic device in the library’s special collections. Similar devices were used during the last decades of the 19th century through the first few decades of the 20th century.  The image is from a book in the library’s rare book collection, Practical Electricity in Medicine and Surgery, by G. A. Liebig, Jr., Ph.D., and George H. Rohé, M.D., published in 1890.