From the archives: first amputation illustration

The first published illustration of an amputation scene, showing ligature-tourniquet, knife, and saw. The figure in the backgrou 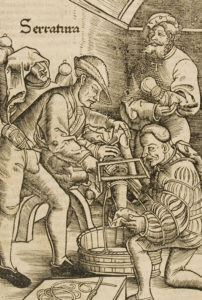 nd has an injured hand, perhaps having lost fingers to encourage the patient having the amputation.

The illustration was published in a work by Hans von Gersdorff (born circa 1455), a German army surgeon with decades of experience. His landmark work was Feldtbüch der Wundartzney (Fieldbook of Surgery—i.e. “Wound Doctoring”), published in Strasburg in 1517. He was one of Germany’s most noted surgeons during the late 15th and early 16th centuries, though little is known about the personal life or background of the man

He described a number of surgical techniques and instruments in his text, accompanying them with several illustrations, including instructive illustrations of early surgical procedures. The work on surgery contained numerous woodcuts, partly anatomical, partly surgical. The latter showed graphically how operations were performed. Gersdorff concentrated on traumatic surgery and wounds, showing the extraction of arrows and bullets.

Many of the images were quite technical, if not always complete or precisely accurate. The book was widely used as a basic surgical text for many years, most notably for its advice on limb amputation, for which Gersdorff was reputed to be much experienced, with at least 200 procedures to his credit.

Gersdorff died in 1529 at the age of 74, presumably the consequence of old age rather than a gruesome amputation or surgery.