From the archives: early obstetrical work from the rare book collection

Eucharius Rösslin (c.1470-1526), was elected as the city physician of Frankfurt on Main in 1506. He also served as physician to the city of Worms, in the service of Katherine, wife of Henry IV, Duke of Brunswick-Lüneburg. While examining and supervising the city’s midwives, he found the pr 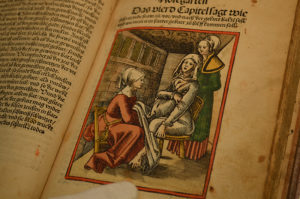 actice of their trade to be careless and substandard, leading to high infant mortality rates.

To better educate midwives and improve the infant mortality rate, Rösslin wrote a book on child birth, which was published in 1513, Der swangern Frawen und Hebamme Rosegarten, which included engravings of a birth chair, the lying-in chamber, and positions of the fetus in utero.  These were some of the earliest known published images in obstetrics.  The book was written in German, instead of Latin (the scientific language of the time), so that more people would be able to read and understand it. The work was an immediate success, and it was published in English in 1540 as The Birth of Mankind.  By the mid-16th century, it had been translated into all the major European languages and had gone through many editions. Rösslin dedicated Rosegarten to his patroness the Duchess of Brunswick-Lüneburg.

Despite his direct observation of midwives working in the city of Worms, Rösslin incorporated obstetrical information gleaned from writers of antiquity, such as Soranus of Ephesus, a Greek physician who lived in the 1st and 2nd C.E. In the introductory prologue in verse to his text, Rösslin emphasized the importance of the role of men in reproduction, and blames midwives who “through neglect and oversight . . . destroy children far and wide.” He threatens midwives with the warning that they will be held to account for their work: “And since no midwife that I’ve asked/Could tell me anything of her task/I’m left to my medical education.”