The term “patent medicine” was used to describe medicinal compounds in the 19th century, which were sold with creative names and even more outrageous claims.  Also sometimes known as proprietary medicines, these remedies, for the most part, were indeed not patented but only trademarked. 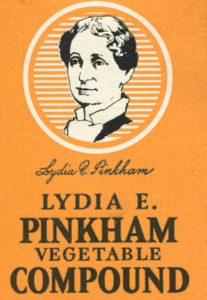 The term “patent” denoted medications whose compounds had been granted government protection for exclusive recipes. Most makers of these “cures,” often small family-run businesses, used ingredients quite similar to their competitors—vegetable extracts laced with ample doses of alcohol, sugar, and various herbals.  In some cases, these “quack medicines” as they were often called, could be deadly, since there was no regulation of their ingredients. Their effectiveness was questionable and their contents were usually kept secret.

Lydia E. Pinkham (1819-1883), who’s slogan was “yours for health,” was a producer of patent medicines.  Her “Vegetable Compound” (see image from package in the library collection) was recommended “for relieving hot flashes and certain other symptoms associated with “Change of Life” and other [female] distress—not due to organic disease.”  Ingredients in this compound included:  Jamaica dogwood, pleurisy root, black cohosh, life root, licorice, dandelion and gentian.  It also contained 13 ½ % ethyl alcohol—as the label notes, “used solely as a solvent and preservative.” Recommended dosage, “take one tablespoonful four times a day, before meals and at bedtime.”