Everyone knows that the stork delivers newborn babies! But for many years in Omaha, that “stork” was Leon S. McGoogan, M.D. (1900-1993), namesake of the McGoogan Library of Medicine at UNMC; whose personalized Nebraska license plates were emblazoned with the word “Stork.” 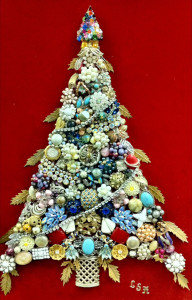 By his own estimate, McGoogan delivered 9,000 babies from the time he started practice in Omaha in 1930 until his retirement. During World War II, being one of only five obstetricians in the city, he delivered an average of 50 to 60 babies a month at Immanuel Hospital where his practice was located. He served as chair of UNMC’s Department of Obstetrics and Gynecology from 1950-55, and again from 1961-62; for nearly sixty years he was an instructor in the department.

While busy delivering babies, teaching medical students, and volunteering for numerous civic organizations, Dr. McGoogan occupied some of his free time by creating beautiful holiday decorations for Immanuel. For Dr. McGoogan’s service to the library of medicine at UNMC, the library was named in his honor in 1978. Two of his beautiful holiday creations are among his papers and other memorabilia in the library’s Special Collections.

Happy holidays to all from the McGoogan Library staff! Dr. McGoogan’s “warm, friendly, traditional” holiday spirit lives on in the facility named for him.