From the archives: A man-mid-wife? 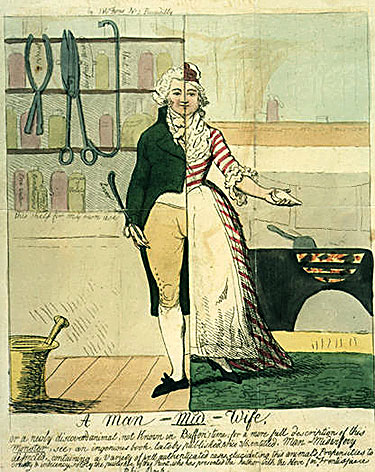 At the end of the 18th century, some male doctors began to build their medical practices by assisting normal births, previously the exclusive sphere of women. A controversy raged in Britain and America about these new man-midwives. The controversy over doctors assisting with childbirth continued throughout the 19th century and into the early 20th, as home births were decreasing and hospital births were on the rise.

The illustration is from Man-midwifery dissected: or, the obstetric family-instructor; for the use of married couples, and single adults of both sexes, by Samuel William Fores, published in London in 1793. The man-mid-wife cartoon depicts one view of the controversy in the form of a “Monster,” a half-male, half-female midwife. The text below the illustration, an advertisement for the book, says:

“A Man-Mid-Wife: or a newly discovered animal . . . for a more full description of this Monster, see an ingenious book, lately published . . . ‘Man-Midwifery dissected, containing a variety of well authenticated cases elucidating this animal’s propensities to cruelty & indecency, sold by the publisher of this print, who has presented the author with the above for a Frontispiece to his book.”

To see more works on obstetrics visit the library’s rare book rooms. Contact the Special Collections Department at 402-559-7094 to set up a tour or inquire at the AskUs desk.