From the archives: Telemedicine at UNMC

UNMC was a leader in using technology to carry out distance education and telemedicine. An early form of teleconferencing was used to present educational conferences to a number of participating locations across Nebraska as well as in other states. This innovation was first proposed in 1955 by Dr. Cecil Wittson (at that time head of the former Nebraska Psychiatric Institute), and developed through the cooperation of the Bell Telephone Company. The system was used weekly to share the lectures of the institute’s many nationally known visitors with other mental hospitals in four states. 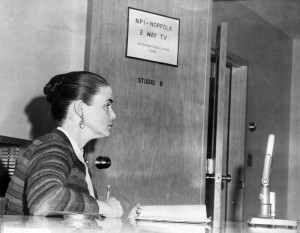 The first two-way closed circuit television system in the U.S. was conceived by Dr. Wittson and developed and tested through grant support secured in 1963. This television system made possible face-to-face communication between the Nebraska Psychiatric Institute located on the medical campus in Omaha and the Norfolk State Mental Hospital 112 miles away. Dr. Wittson’s close associate in these telemedicine innovations was Reba Benschoter, Ph.D. (shown). Wittson was chair of Psychiatry (1952-1964), COM Dean (1964-1968), and the first Chancellor of UNMC (1968-1972). Dr. Benschoter was later head of the Biomedical Communications Department and from 1985-1995 she was associate dean of the School of Allied Health Professions.