A Day in the Life: Miss Korey 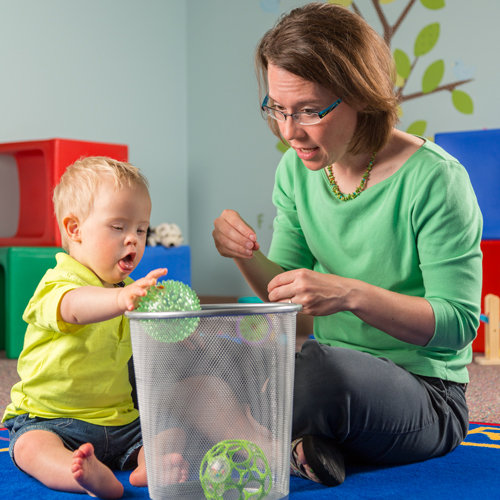 For a while – perhaps 15 minutes – Korey Stading seems like any other office-based professional. She has one foot tucked under her as she sits at her desk, going through the day’s schedule on her computer. Then Korey hears a noise in the hallway outside her office. A grin splits her face; her shoulder-length brown hair flounces as she spins from her chair.

“It sounds like my friends are here!” she says, bouncing up from behind the desk. She’s right; as she exits her office into the hallway, she finds two of the morning’s “friends,” 4-year-old Chase and 3-year-old Ezra, entering the preschool room across the hall.

The preschool room and Korey’s office are located at the Munroe-Meyer Institute for Genetics and Rehabilitation. Korey and her colleagues work in the speech and language pathology department at MMI, helping children with varied developmental disabilities to learn to speak. Korey’s preschool is an early intervention program, serving children aged two to five. She is one of three professionals in this morning class, but she is the lead therapist.

Korey has been at MMI for close to 19 years, and her days are varied. Part of her job during the school year is doing outpatient therapy at MMI for children and adults with speech and language problems. She’s also under contract with Omaha Public Schools to do assistive technology evaluations and to serve as the speech therapist at J.P. Lord School, where OPS students with several intellectual or developmental disabilities attend classes.

And then there’s her pre-school. The class – like everything Miss Korey does at MMI – is paid for by donations from the Scottish Rite of Omaha, which has been funding speech work at MMI for more than three decades.

“Beginning in the 1950s, Scottish Rite Freemasons recognized the extraordinary value of supporting speech-language therapy for children,” says Micah Evans, a spokesman for Scottish Rite. “Most children who receive services and overcome speech difficulties go on to enjoy a healthy childhood and become lifelong learners.”

Speech therapy has been the national philanthropy of the Scottish Rite fraternity — Nebraska’s Scottish Rite Masons have been supporting RiteCare Clinics provide speech and language services for more than 40 years.

“Miss Korey has a genuine concern and care for each child’s success,” Evans says. “She truly wants each child to achieve their potential, and whether it takes four sessions or 40, she works with patience and care to help children.”

The positive results of this work, Evans says, are proven every time a parent relates how a child’s personality and confidence blossoms when he or she can express thoughts clearly.

Miss Korey will have three one-hour sessions today, each with a different group of students. And today’s first batch of “friends” is happy to see her. 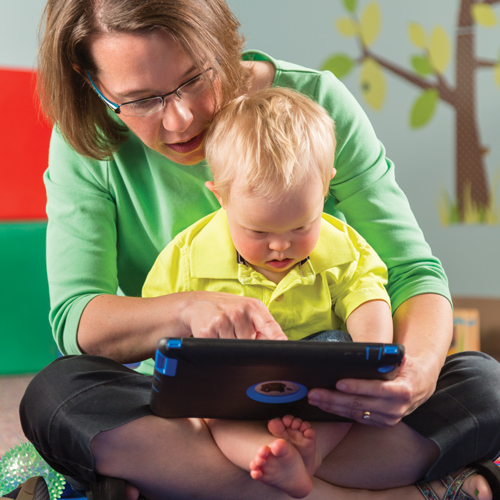 “Hi, Ezra! Hi, Chase!” Korey greets the boys, who are standing with their mothers. Chase is a red-headed boy wearing a bright red Chicago Cubs hat. He smiles back at Korey. Ezra, a brown-haired little boy in a blue, button-down shirt, is already seated. The carpeted classroom features plastic seats, with white desktops that can be lifted into place or quickly removed. Ezra is behind his white desk, ready to begin the lesson.

As more students arrive – the morning class will top out at five children – Korey sits cross-legged at the center of a loose semicircle of desks. Her light green pants could at first be mistaken for nurse’s scrubs, and she wears running shoes and a hoodie. Behind her are two large, two-way mirrors through which the parents and grandparents can watch the day’s lesson. Between the mirrors, hanging on the wall, is a laminated schedule for the lesson: Circle, surprise box, music, book, snacks and goodbye. And even before the lesson officially gets under way, Korey has shifted personalities.

“Chase!” she exclaims, her voice high and excited. “I want to see your cool glasses! You have glasses just like me!”

Chase’s new glasses do actually resemble Miss Korey’s – she wears black-rimmed, Nike frames and her hair falls forward as she leans in to take a closer look at Chase. He smiles back at her, reaching out to touch her glasses.

In the semicircle around Miss Korey, the children are using various assistive devices – iPads, tablets, and even laminated pieces of construction paper with various photos pasted on them, some of which they have brought with them, and some of which the preschool supplies.

“We try different things for different kids,” Miss Korey says. “Some of the students can even use their devices to make sentences.”

The devices are necessary because this preschool is designed specifically for students with language delays. Chase, Ezra and their classmates have trouble speaking. Miss Korey’s job is to help them communicate, through speech if possible, through other means if not.

Miss Beth and Miss Ellyn station themselves to the right and left of Miss Korey, sitting behind and between the children. (Miss Beth is Bethany Hughes, another speech-language pathologist from the Munroe-Meyer Institute. Miss Ellyn is Ellyn Kennedy, a graduate student from the University of Nebraska at Omaha.)

The class runs year-round, but on a university schedule, because of the graduate students such as Miss Ellyn that come in to help, resulting in an eight-week session in the summer, and a “college semester” sort of schedule, September to December and then January to May.

Miss Beth is sitting behind Trevyn, 3, who is styling this morning in a Ninja Turtles hoodie that the teachers make much of when he arrives. (“I like the Ninja Turtles, too, Trevyn!”) Miss Ellyn sits between Ezra and Chase – Chase is already trying to divest himself of his new glasses, which Miss Ellyn cheerfully and firmly puts back on his head.

From her spot at the center of the semicircle, Miss Korey leads the class in a loud version of “The Itsy-Bitsy Spider,” making the motions as she sings – walking her fingers together to show the spider climbing, dropping her hands, fingers fluttering, to signify the rain. Several of the “friends” mimic her motions and sing along. When the song is over, Miss Beth shows Trevyn two cards. One has a star on it; the other a spider. Trevyn points decisively to the spider, and the class begins singing “The Itsy Bitsy Spider” again.

As Miss Beth and Miss Ellyn continue leading the song, Miss Korey begins to move, scuttling forward to take Trevyn by his hands, asking him “Do you want to dance?” She swings his arms gently back and forth in time to the music, then thanks him for the dance before sitting back and banging her feet on the floor in time to the music.

When the song ends, Miss Korey declares, “I need schedule helpers!” She looks around the circle expectantly.

Miss Ellyn retrieves a small metal wastebasket filled with plastic pointers, and each child is offered a choice of two different colors.

Trevyn chooses purple, but he has to work for it.

“Purple.” She purses her lips, popping the P sounds.

“Puh-pul!” Trevyn says triumphantly as all the teachers cheer. Ezra, who has chosen a red pointer, waves it above his head excitedly, as if to applaud his classmate as well.

Miss Korey’s use of sign language when talking to Trevyn – touching her chest for “I,” for example – is not accidental. Sign language is another avenue of communication, and the teachers use basic signs throughout the class.

“All of our kids have expressive language delays of one form or another, so it’s another mode to allow them to express themselves, and obviously they can’t learn it if we don’t show it to them,” Miss Korey says. “So we model it all the time.”

The movements also can serve as a cue for the children who do use their speech. “Sometimes that sign will cue the word, so we’re not having to say it for them to imitate. It also is another visual, so it helps with kind of receptive understanding or directions or other things, too.”

One everyone has a pointer, Trevyn speaks again. He’s been in the class slightly longer than his four friends, and he’s more outgoing.

Miss Korey is at his side immediately, lifting the white portion of his desk up so he can leave his seat and toddle to the schedule on the wall. (Miss Ellyn and Miss Beth help the other children to the wall, as well.) With the teachers’ help, the children use their pointers to pick out the next activity on the schedule – they’ve finished with “circle,” and now it’s time for “surprise box,” where each student is shown a box that, when opened, has something inside – a ball, a pinwheel – that can be used for more language prompts.

After surprise box, the class goes on to “music,” signified by a line drawing of a man holding his hand to his ear with a note hanging in space alongside him.

Brightly colored maracas are passed out to the class, and the teachers and students swing into another song. (“We’re going to the zoo, zoo, zoo….:”) From her space in the center of the circle, Miss Korey waves her arm like an elephant’s trunk, or snaps them together like a crocodiles jaws.

This time, Ezra responds to the prompt – “More!” – And the music begins again, the teachers doing most of the audible singing (“… how about you, you, you?”), but the students waving maracas and smiling and singing along as best they can.

As the song nears its end, Miss Korey places her cheek on her folded hands – we’re home from the zoo and going to sleep. Trevyn puts his hand to the side of his face, imitating her for a moment – but then the song explodes again into one more upbeat verse (apparently, we’re going back to the zoo tomorrow), and the children wave their arms and bob their heads with excitement.

The exaggerated facial and mouth expressions, the loud, sing-songy voice, the “turned up to 11” intensity is a style of teaching, not a personality quirk. It’s a style Miss Korey learned as she took her master’s in speech-language pathology at Texas Christian University after getting a bachelor’s at the University of Nebraska Lincoln.

“We’re working with little kids,” she says. “To gain and keep their attention, to keep them focused, we use those strategies. We have to be energetic and enthusiastic. It’s not a natural skill for everybody.

“Beth and I always hate it when we see videos of ourselves,” she admits.

For snacks, the class moves to a small, semicircular table. Miss Ellyn takes center stage now, sitting on the other side of the table. Before handing out treats, she squirts some hand-sanitizer onto her own hands and washes the hand of each friend.

Chase first uses his assistive device to ask for fruit snacks, then yogurt, but he settles for pretzels. Ezra indicates with his finger on a photo that he wants a cookie, while Trevyn, who has been working hard today, elects to start out snacks with a glass of water.

“Aaah,” he says, exaggerating the sigh to the delight of Miss Korey as he puts his green cup down.

After snacks, the group moves to a blue circle on the carpet, some of the children sitting on the floor, some nudging their way onto teacher’s laps. It’s time for goodbye.

“Now we’re finished with snacks and it’s time for …”

“Goodbye,” some children join in, waving their hands. Each child is given their own goodbye, the teachers singing their names, and then they are told it’s time to go out and look for mothers and fathers – Miss Korey making the sign for each parent as she talks, Trevyn and some of the other students imitating her.

One thought on “A Day in the Life: Miss Korey”