Posted by John Keenan | February 10, 2016
Tom Blount, a fourth-year medical student, recently got to meet his bone marrow donation recipient a year and a half after the donation. Tom is a member of Decreasing the Donor Deficit (DDD), a service learning legacy project at UNMC, which partners with the “Be the Match” National Bone Marrow Donor registry. DDD will have a week-long donor drive on the UNMC campus beginning Feb. 15. Find the location nearest you to get on the registry — it only takes a cheek swab! Getting on the registry is FREE for students, staff, and faculty on the UNMC campus. Contact Jenny Sharrick at jennifer.sharrick@unmc.edu for more information.

At the time of my bone marrow donation on June 4, 2014, I knew very little about where my marrow was going.

All I had been told was that there was an 11-year-old girl with leukemia somewhere in the world, fighting for her life. Part of my donation process was coming to grips with the fact that I might never hear another word about this little girl who had become such an inspiration for me.

After my donation operation, I sat down and composed a letter to that special girl, telling her what her fight had meant to me. Legally, I was required to wait a full year before any contact with her or her family, so when June 3, 2015, rolled around, I was filled with cautious optimism, hoping that she would want to meet me as much as I wanted to meet her. Sure enough, I got a long email from her mother, just after the one-year anniversary of the transplant!

We traded long emails, and I learned that my recipient’s name was Ashley, and she lived with her parents and her little brother Scotty just outside Chicago. I am currently in the process of traveling the nation as I interview for pediatric medical residency positions, and my interview trail would bring me through Chicago in early December.

We were finally able to settle on a date to meet, and my excitement built. I found out that Ashley was as excited to meet me, and she was already planning a full day together. The night before our meeting, I barely slept due to the excitement that had built for over a year. I got up and I remember my hands shaking as I showered and got dressed. My fiancé Sydney helped to calm me down.

Finally, Ashley’s mom called me, saying they were outside my best friend’s house, where we were staying in Chicago. I opened the door and saw the biggest smile I’ve ever seen, and Ashley gave me a big hug. We welcomed her and her family inside, and we sat in the living room and talked for an hour or so. We heard all about Ashley’s fight, and I had tears in my eyes hearing about her long and difficult battle since being diagnosed with cancer on New Year’s Eve, almost two years before.

I found out that her current streak of three weeks outside the hospital was her longest stretch since her diagnosis, and in just a year since the transplant she had suffered several bouts of pneumonia, a punctured lung, and countless hospital admissions. It was evident that this family had been radically changed by Ashley’s diagnosis and subsequent fight, and they had galvanized in an amazing way.

Ashley was very quiet for the first part of our day. She just sat with her mother, with that mile-wide smile on her face. When she did speak, however, I was blown away by her poise and maturity. The horrific experience of being diagnosed with cancer at such a young age has forced her to mature well beyond her years. She spoke of her time fighting cancer with the confidence of a seasoned fighter.

At first, I was taken aback when Ashley’s mom talked very openly about her daughter’s near-death experience. Shouldn’t she protect Ashley from hearing these scary things? It didn’t take long, however, for me to realize that this little girl has already been through more in her life than I can even imagine, and she knows that words could never hurt her like chemotherapy or radiation did. She beat cancer, and she is extremely proud of that fact.

After we talked for a bit and rehashed her story, Ashley had planned a lunch at her favorite Chicago sandwich place, Portillos. We ate, then stopped by Comer Children’s Hospital so Ashley could show me off to the staff who had supported her through her treatments. It was very humbling to be thanked by so many individuals. My donation process was seriously nothing compared to what Ashley and her family had gone through, so it felt weird to receive praise for anything I did.

Our day concluded at Ashley’s home, where we were greeted by about 20 family members who all wanted to meet me. Ashley had made me a beautiful and delicious cake the previous night, and she also gave me a picture she had painted for me, and a picture of the two of us together to hang in my office someday.

It was an incredible experience that I will remember for the rest of my life, and I will definitely maintain contact with Ashley and her family. Her fight is not over; she is currently fighting kidney damage caused by chemotherapy, and every fever for the rest of her life will be cause for alarm.

That being said, I’ve never met anyone with Ashley’s toughness or resolve, and she has an unbelievable support system behind her. I will continue to do my best to spread the word about how life-changing bone marrow transplantation can be, and in the meantime we will all remain #TEAMASHLEY. 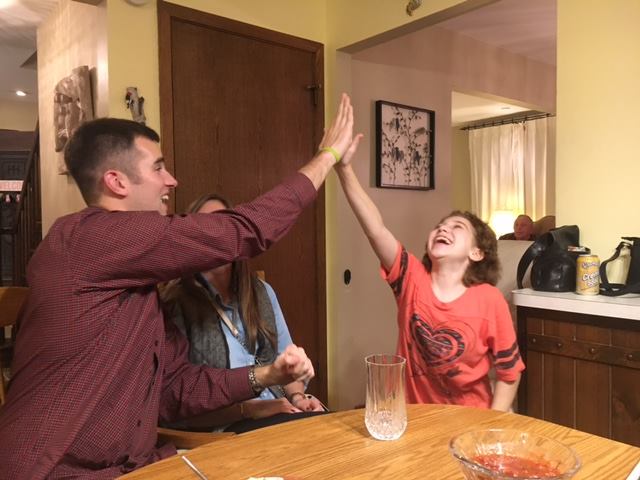 One thought on “My bone marrow donation story”