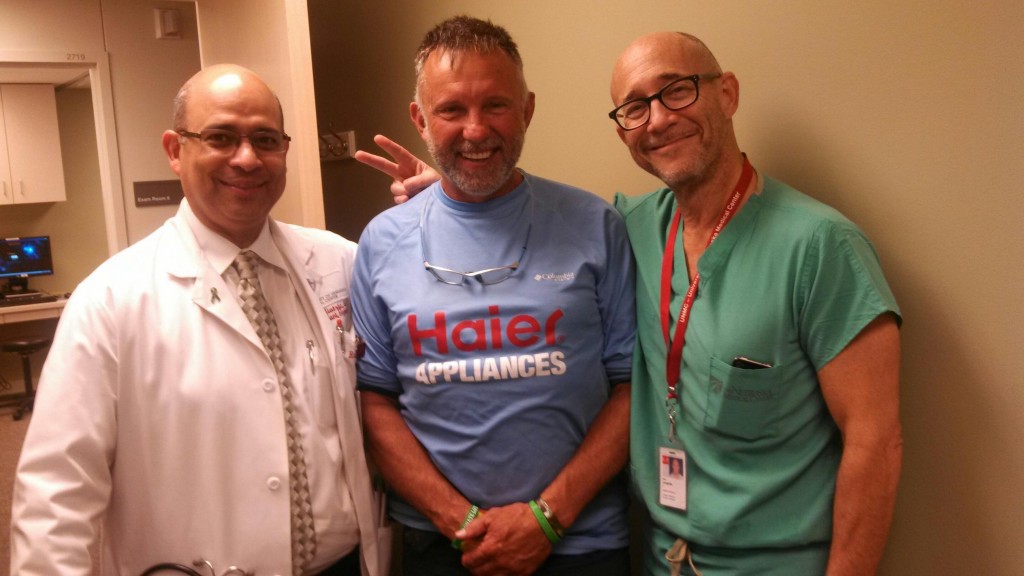 Don Erickson was walking down Leavenworth Street on Thursday morning when he looked up and saw three words that made him stop. Lied Transplant Center. You see, Erickson wasn’t just out for a stroll in Omaha. The 55-year-old is on a trek across the country. By foot. He’s walking the approximately 3,300 miles to raise awareness for organ donation. 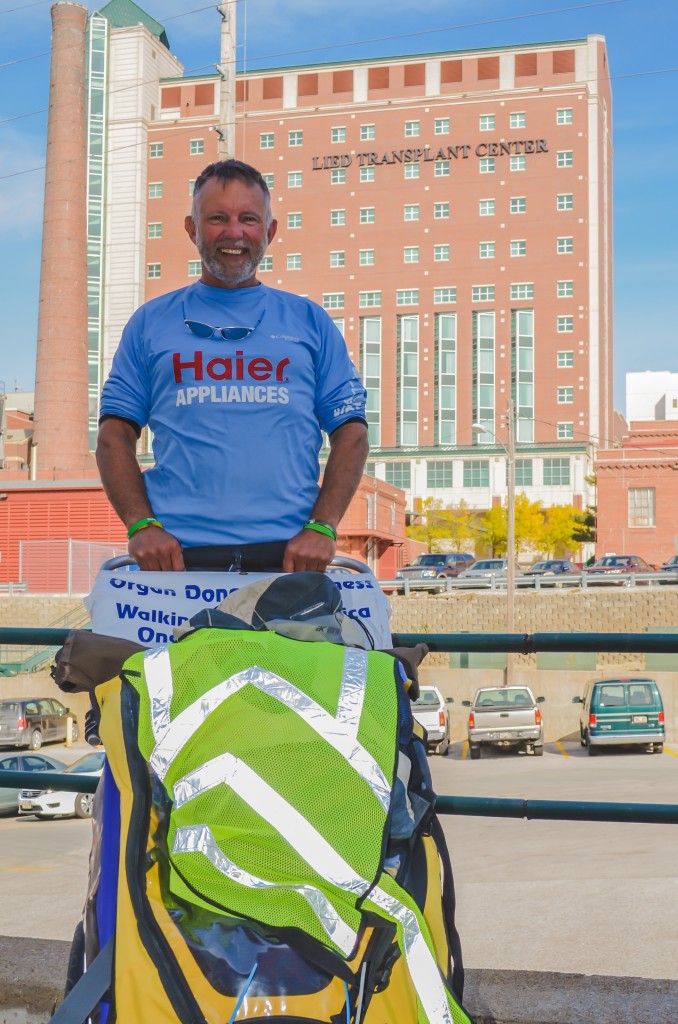 A good friend’s brother died after complications from a grand mal seizure. Because of the Y on the man’s driver’s license and his family’s verbal yes, Joe Rethmeier saved five lives with his organs. He improved more than 50 with his tissues and skin.

One of those lives was that of an elderly woman who needed new corneas. The woman’s husband had Alzheimer’s disease. Upon receiving the gift of sight, she was able to renew her driver’s license and remain the primary caretaker of her husband. And he was able to remain home with her.

Stories like this are what sparked Organ Donation Awareness: One Mile at a Time.

Along the way, Erickson encountered a bear in New Jersey. (Get big and roar. Erickson said that made the bear scamper back into the woods.) He’s also thrown out the first pitch at a Minnesota Twins game. (He still gets goose bumps when he talks about it.) He gets by on beef jerky, almonds, peanut butter and a whole lotta pop tarts.

Erickson started in New York in June and will be halfway home when he reaches Kansas. The goal is to make it to Arizona by Christmas to spend the holidays with his youngest son, and California by the end of January. Prior to the start, a friend bet him that Erickson would want to quit at least 100 times by the time it was over. Erickson says he wanted to quit 100 times before he reached Iowa.

But he didn’t. And he won’t, because of people like Dillon in Ohio. And Alan in Indiana. And Charley in Iowa, whom he met last week outside of Avoca. Charley is a young heart transplant recipient, who read about a guy trekking across the country to support organ donation in her transplant newsletter a couple weeks ago. Imagine her mother’s surprise when she happened upon Erickson while driving around Avoca.

“All three of us are in shock that nothing but fate has brought us to this meeting,” Robin Butler recalled on her Facebook page. “We will never forget the man walking for such an amazing cause.”

“Just seeing Charley smile and to see how happy her mom was… it made it all worth it,” Erickson said, adding that he misses his family dearly, especially girlfriend Val.

An electrician by trade who flips homes on the side, Erickson said he’s learned two main lessons on his journey.

Number one: expect the unexpected. Erickson’s had his phone stolen, his wallet taken, met a man who believed he was Moses and twice abandoned his belongings to jump in the ditch and avoid cars.

“Texting and driving,” Erickson lamented. “My next walk might be on that.”

Lesson No. 2. People are kind. Total strangers hand him $10 and $20 bills. Churches and fire departments open their doors for a place to stay, though he camps most nights.

At UNMC, we treated him to a hot lunch of chicken and dumplings in the Nebraska Cafe. Lisa Spellman in Public Relations arranged for him to meet liver transplant recipient and UNMC employee Dave Eggers. Debb Anderson heard what was happening and went straight to the top. Mere hours after arriving at the med center, none other than the chief of transplant surgery himself, Alan Langnas, D.O., gave Erickson a tour of the Lied.

The weary traveler was so impressed he booked an open hotel room for the night. He said he won’t soon forget his experience at the med center. It was everything he hoped for when he stopped his cart earlier that morning and looked up.

Don Erickson by the numbers

2 – the number of miles per hour he walks

600 – the number of gloves he’s spotted on the side of the road. He started posting pictures of them on his Facebook page. Joe Rethmeier’s mother has a theory: they’re high fives from heaven, sent by her son.