Dr. Maurer and his patient: Their work lives on 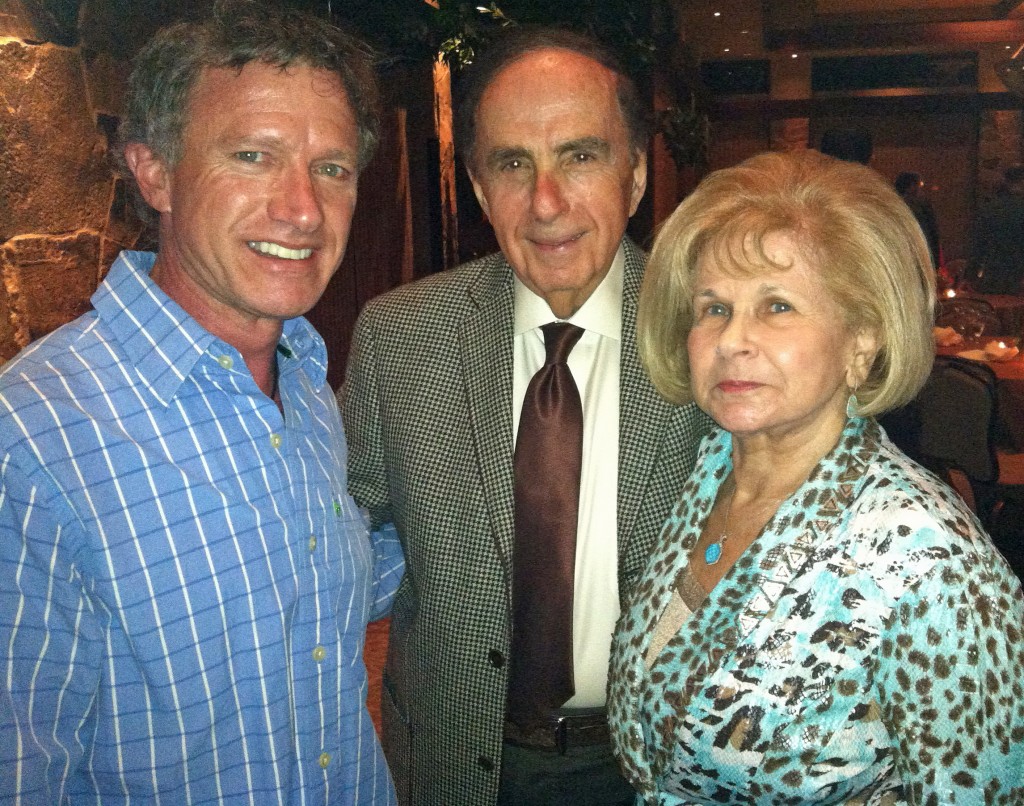 Stephen Smith had Rhabdomyosarcoma when he was a kid. He re-connected with the doctor who helped save his life, and with Mrs. Maurer, at a University of Nebraska Foundation event earlier this year.

In the past year or so, Stephen Smith has been thinking a lot about his old friend and former doctor, Harold M. Maurer, M.D.

They’re each about to enter new phases in their lives, Smith said. Dr. Maurer, of course, is wrapping up his tenure after 15 years as chancellor at UNMC.

Smith was one of those kids Dr. Maurer had helped cure of rhabdomyosarcoma, a then-incurable childhood cancer, many years ago: “I’ve been really blessed with an amazing life.”

But now, some 40 years later, all of that radiation is finally taking its toll. He’s had stomach problems, health problems. He’s exhausted. A teacher, he missed maybe half the school year last year.

It’s frustrating and it’s sad, but he isn’t bitter about it. It just is.

As the students asked him what’s wrong, he would give them a little, just enough: No, I don’t have cancer. I had cancer when I was a kid. I’m having some stomach problems. He told them bits and pieces, here and there.

At the end of the year, he gave them a project. Tell him what they had learned this year – maybe to make them realize they had learned something, even with their teacher having missed so many days.

“One kid, this kid I had heard maybe three words from all year long,” asked to do his presentation orally, privately, outside. Smith started to object, but the kid showed such uncharacteristic insistence the teacher couldn’t disagree.

You were part of a big study, between the years X and Y, the student said. Smith was stunned.

How could he possibly know that?

“I have a scar,” Smith said. The student lifted his shirt.

“He showed me the exact same scar.”

Then the quiet kid said this: “What I learned this year was that you helped save my life with that study you went through when you were a kid.”

Stephen Smith was 12 when it happened. One of his testicles was swelling, it was abnormally large. But he didn’t say anything. “I was embarrassed to tell my dad.”

By the time they got to a hospital it seemed as if the whole world had suddenly jumped into fast-forward: they needed to get it out right away. He had a really, really, really bad kind of cancer.

“They didn’t tell me that, they told my parents that. But kids are perceptive,” he said. And what he was seeing was that his parents were pale in the face and scared to death. There was no real treatment for what he had.

But his parents had a good friend who was a big surgeon in town.

“I don’t know what he did,” Smith said. “This was before the Internet. He got on the phone, he wrote letters all over the country.”

It turned out the foremost work being done at that time was being done just down the road at the Medical College of Virginia, by a young doctor named Harold M. Maurer, M.D.

They met with Dr. Maurer, and Walter Lawrence, M.D., the surgeon. “They laid it out for my parents,” Smith said. “I know at that time my parents did not have great insurance. It was going to flatten them financially, they were going to be left with nothing.”

Dr. Maurer said the studies were very promising. They were having some luck. But he also explained that all of this was very experimental. There would be a lot of trauma – a big exploratory surgery on a 12-year-old boy’s abdomen. There would be rounds of radiation.

“My parents were amazing, even though I saw them aging by the day in front of me.”

But then something wonderful happened. He got better. The treatment started working. He put weight back on, and they kept checking, and every time they did he was cancer-free.

“It was just miraculous,” Smith said.

Eventually he stopped having to come in for check-ups. He and his doctor lost touch. He was well. He was normal. He went on to live a wonderful life.

Stephen was afraid of doctors as a kid, but Dr. Maurer was different. “I remember lighting up when he came in the room,” Smith said. His mom always said the same thing.

“Dr. Maurer always had a smile on his face,” Smith said. “He was just so positive. He made me feel like, We’re going to do this. It just wasn’t a question in his mind that I was going to get better.

And then, he did get better.

“I remember (Dr. Maurer) toward the end being almost giddy,” Smith said. “He was so thrilled to have done this.”

What does he remember about Dr. Maurer?

Forty years later, Smith started having health problems. They had told him long ago that this would happen, that the radiation would someday exact its price. It might take five years, might take 10.

He was depressed, being sick, but when he realized why it was happening, it brought a lot of the old memories back. Smith found himself wanting to reach out to his old friend and former doctor, to let him know what was happening; to tell Dr. Maurer how it had all turned out.

He called the UNMC chancellor on the phone: “He told me, ‘It’s so great to hear from you,'” Smith said. “He said, ‘We helped change the world. We helped the way cancer is treated, even today. Be proud of what you’ve gone through, because it really was groundbreaking.'”

Then Dr. Maurer went to California on a University of Nebraska Foundation trip, and his old patient met him there. They had a mini reunion, something Smith calls “one of the high points of my life.”

At one point Smith found himself talking with Beverly Maurer. “She told me, ‘Those were his happiest days, when he was right there in the trenches.’

“Those were the times when he was really at his best.”

They have a lot in common, doctor and patient. In their best days, each of them worked with kids.

At the beginning of this story, we told you that Smith and Dr. Maurer are both entering new phases in their lives. Dr. Maurer is leaving his role as chancellor.

And with these health problems … Smith wonders if he’s already taught his last class.

He’s only 51. And he hasn’t yet been able to bring himself to file disability/early-retirement paperwork yet. But he admits he’s just putting it off. It’s only a matter of time.

Lately, he’s been thinking a lot about Dr. Maurer.

“We’re stopping working,” Smith said. “But it doesn’t mean the work that we do stops. It continues on.

“That’s a pretty profound thing when you think about it,” he said. “Your work is very much alive and well.”

He may as well have been saying it to his former doctor and old friend.

11 thoughts on “Dr. Maurer and his patient: Their work lives on”