How Healthy U saved my life 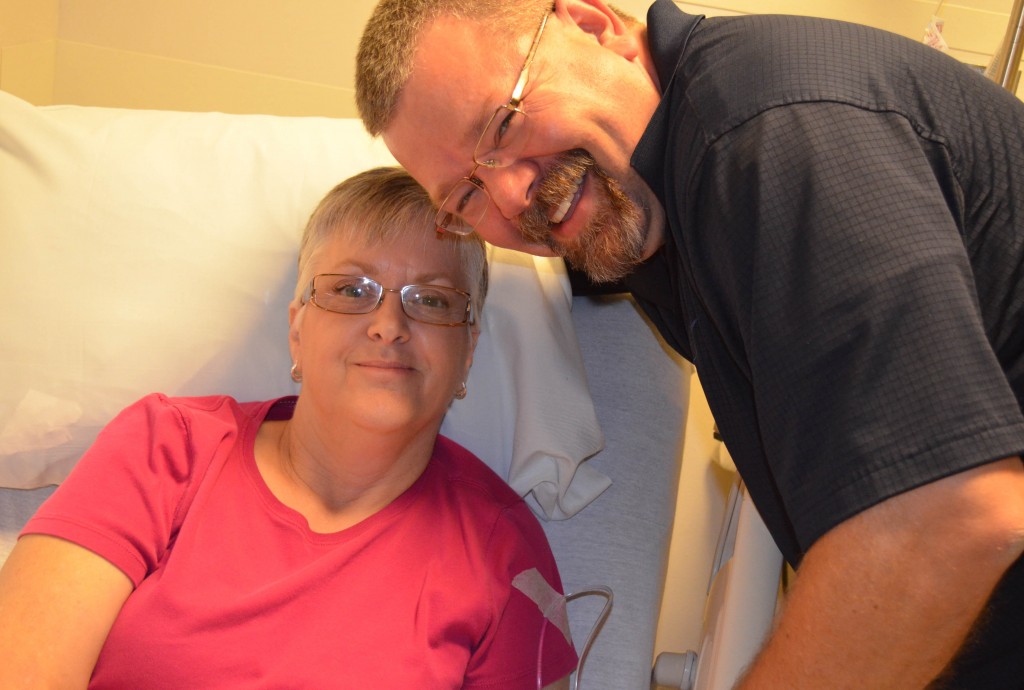 Penni Davis is a grant protocol associate who has been at UNMC for 14 years. She is a mother of two and has been married to her husband, Sean – “a wonderful man,” Penni says – for almost 30 years.

On May 10, feeling absolutely fine, Penni went in to have her annual checkup.

The following is what happened next . . .

May 10, 2013: I went in to have my normal annual check-up. You know that stuff we ladies do but hate? Well, I was told I didn’t need any tests this year, and I was really glad. I’m turning 60 in a couple of weeks, and things were good. I always do the Healthy U, have for several years. I get labs done because I like to keep tabs on cholesterol, triglycerides, LDL and HDL. I also have had hypothyroid for about 35 years and need to have my TSH levels read yearly to get a new prescription. It’s free, easy, so why not?

Rachel Bonnema, M.D., in the Olson Women’s Center is great. I’ve seen her annually for several years. We talked about how all was going well with me, and that I wasn’t even dreading turning 60. A few days after my appointment with Dr. Bonnema, I went to have my blood draw for the Healthy U lab work. No big deal.

May 23, 2013: I left for Indiana for the Memorial Day weekend, driving with my husband and son to visit my in-laws and attend the Indy 500 (a yearly, fun trip for us). On the way, my cell phone rang.

It was Dr. Bonnema. She asked, “How are you feeling?”

She said, “No really, how are you feeling?”

“Well,” I said, thinking about it, “other than being tired a lot lately, I’m fine. Why?”

“I just don’t like some of the numbers that came back on your lab work, and I’d really like you to come in tomorrow and have more blood drawn and have the labs run again.”

May 29, 2013: The next day, I was referred to Justin Westervelt, M.D., in internal medicine – nephrology. I had an appointment made to have a kidney ultrasound and a 24-hour urine protein screening.

May 30, 2013: For my 60th birthday, I got a kidney ultrasound and more labs. I was feeling a little like a pin cushion, but still not worried or concerned — I felt fine!

I was tired often, but I’m a busy person and just thought it was life. I have taken Naproxen (Aleve) for several years for arthritis and thought that the problems with my numbers might be caused by that, so I stopped taking it as of May 23. I fully expected things to go back to normal real quick.

This was getting crazy. Dr. Westervelt wanted a kidney biopsy to confirm his diagnosis and to know the exact condition of my kidneys. The ultrasound showed normal-looking kidneys, so there were no growths or such, which was good news. The doctor also recommended that I have a bone marrow biopsy — as there was also blood in my urine and he wanted to rule out any other problems — and then to see Julie Vose, M.D., in hematology. All this time I was just doing what I was being asked and trying to understand what was happening. I still felt fine — except for being tired.

June 14, 2013: I had the kidney biopsy done. This went much better than I expected; The Nebraska Medical Center personnel were fantastic and understanding of my nerves and fears. My husband and I prayed for no pain. I was sore in my back for a day or two, but had no other discomfort. I had developed nausea over the past week or so and found it difficult to eat much of anything. Everything smelled bad, tasted metallic and just didn’t sit well. Bagels became my favorite food — I was living on them, as they were one of the few items I could eat without feeling sick. I thought, “This is getting really weird.”

June 21, 2013: My first appointment with Dr. Westervelt. My husband had always been on the conference call with me and the doctor, because if I had to try to relate all this information to him afterwards, it would be a mess. So when it was the day to actually go and get the results of all of the tests, Sean was there too.

And thank God he was, because Dr. Westervelt’s report was not good.

End of Part One

WEDNESDAY: The report, and what followed

5 thoughts on “How Healthy U saved my life”