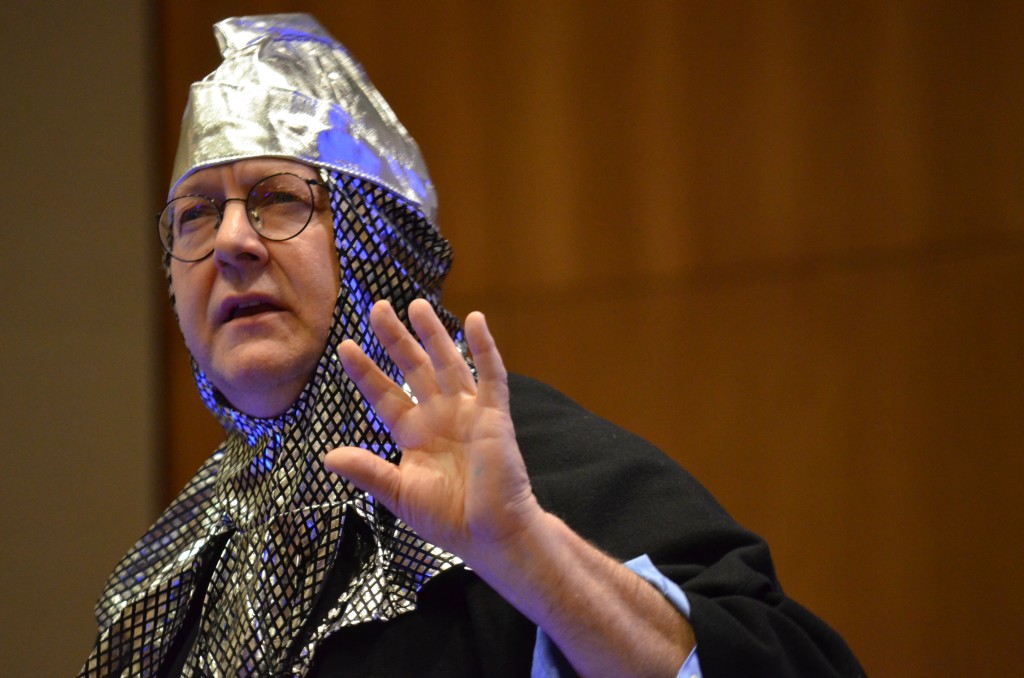 Ed Vandenberg, M.D., associate professor in the department of internal medicine, division of geriatrics and gerontology, knows the power of knights. Their suits of armor. Their codes of honor. The way lances and swords hold sway over our imagination.

And so he annually gives a lecture before an auditorium of students while wearing a gleaming helm.

But in the dressing room before striding out, he is apprehensive. When did this get so big? Now there’s a photographer from The World-Herald in the audience, and a guy taking video, too, and longtime Omaha columnist Mike Kelly is writing things down (this is what happens when you mention something to UNMC public relations ace Tom O’Connor). It feels like all of this is getting a little bit out of hand.

“I’m worried the students are going to think this is about showmanship,” he says quietly. “Because it isn’t about that. It didn’t start out like that.”

No. It started because Dr. Vandenberg is a teacher. He just comes at the job differently than most. He’s back in academia now, but before he came to teach at UNMC he’d lived a little. OK, a lot. He practiced medicine in northwest Alaska, near the Arctic Circle, by the Bering Sea. And in northern, rural Wisconsin. Urban areas, too.

He knows how important it is that his students get this.

So he has his own methods. For years, he’s given his students “Geri-Pearl” cards, cards which break down the symptoms and care of most common geriatric medical problems onto a single mini-page. If a student seemed stumped by a particular scenario, Dr. Vandenberg would take that card out of his pocket and place it in the student’s hands. There.

Learn it. Know it. Live it.

He bursts into the auditorium wearing a black tunic and waving an 18-inch plastic sword. His “helmet” shines in the lights. He delivers a spirited monologue in a patois that is part Monty Python, part “Richard III.”

“Will you join me on this quest?!”

They will. They are. They already have.

“We sit in school for four, six, eight hours a day,” second-year med student Joseph Rohr would say. “Having something unique is good.”

The laughter and the looks on the faces of the students confirm this: They are with him on this ride.

“Enough with the bad British accent,” the knight says. Time to talk about geriatric falls. How to diagnose them. How to treat them. How to prevent them.

“The bathroom is the most hazardous room in the house,” Dr. Vandenberg says.

“I don’t know why anybody goes in there.”

How can you tell if a patient had passed out? Ask them the last thing they remember.

For example: “I think I saw Ed in a knight helmet.”

He puts up a case study of an older woman who had fallen, all of her symptoms. He talks about getting additional info from the witness to the fall, her son.

How does he know how traumatic this can be?

Dr. Vandenberg used to have a “real” knight’s helmet. It was awesome. He misses it, a little.

But the rental store that carried it closed, and now he makes due with a somewhat less protective version, something a kid might wear on Halloween.

Still, it works. Not because of the helmet, but who wears it. He was recently awarded the University of Nebraska’s Outstanding Teaching and Instructional Creativity Award, the university system’s highest honor for doing what he does.

It comes through: He knows how important it is that his students get this. And they know he knows.

But with all of these cameras recording everything, with all this extra hubbub, will the lecture he’s about to give have the same impact?

In the dressing room beforehand, he frets.

“Please,” he says politely. “Keep that door closed.” It would ruin everything, for the students to see him too soon.

This isn’t about showmanship.

When you make the right entrance, you can have them in the palm of your hand.

2 thoughts on “Dr. Vandenberg: Working on his knight moves”