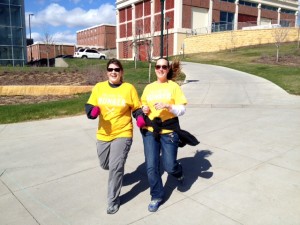 I used to race for fun, back when I was young and (relatively) fast.

These days, however, I run road races much less frequently, and prefer to race (if you can even call it “racing” anymore”) for a reason.

On April 19, for example, I took part in UNMC’s Hustle for Hunger, a three-mile run/walk designed to collect donations of canned and boxed foods for the Food Bank. I was looking for a short race to run near the end of April, and as a newcomer to UNMC, I figured a nice, noncompetitive race might get me some exercise, help me support a worthy cause, and perhaps allow me to meet other runners who work or go to school at UNMC.

After two days of rain and snow, the early spring crispness of Friday afternoon seemed perfect running weather, not only to me but to the 50 or so people who turned out to run or walk the course. (By the way, it’s not too late to help out by dropping off a donation at one of these locations.)

I’m certainly not alone in running for a cause – and the Food Bank of the Heartland isn’t the only organization that allows you to flex both your fast-twitch and philanthropic muscles. This coming Saturday alone, a fitness junkie could run a 5K for Fertility or a 5K to support autism awareness. A bicyclist could Bike for Sight (in another UNMC-related fitness event). You could knock out a quick mile to “Keep Kids Alive – Drive 25.” Or walk the Nebraska Lymphomathon. And that doesn’t include events on the surrounding weekends, races that support Siena/Francis House or help provide shoes for needy children.

I used to leave races feeling bad about missing an age-group award. When I finish the autism run this weekend, I suspect I’ll leave feeling bad about not making my fund-raising numbers. As a fund-raiser, the best thing you can say about me is I’m a pretty good runner – my “Personal Fundraising Page” for the autism run has netted $40 (including $20 that I kicked in myself). But if I’m going to put up $30 to $40 to run a race, I like the idea that there’s more than a T-shirt as a payoff. And – counting what it cost me to register for this race – I figure at least I’ve given a little money to a good cause.

The Hustle for Hunger didn’t even cost that – the can of peaches I donated for my entry fee ran me a couple of bucks. But the payoff is much bigger than the food donated at one event, according to Brian Barks of the Food Bank of the Heartland.

“Food drives are mini PR campaigns,” Barks said. “While hundreds and hundreds of food drives are done on our behalf, product received from those food drives comprise less than 5 percent of our inventory. So generating awareness through food drives has become a critical component.” 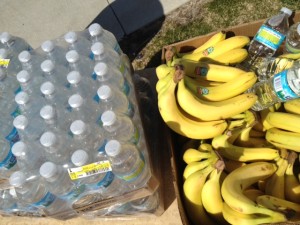 You had to think some awareness was generated Friday, with the bright yellow Hustle for Hunger shirts increasing visibility as runners and walkers went from the start near the ice rink out onto Dewey, up 42nd Street to Douglas, turning west then south again to climb the hill near the Munroe-Meyer Institute before circling past The Nebraska Medical Center’s main entrance and back toward the start. (Props to Munroe-Meyer, by the way – the team of walkers and runners from MMI bought boxloads of food items with them.)

My running is not always about philanthropy. I’ll be racing a Half-Ironman triathlon in June for no other purpose than to prove I can do it and feed my enormous ego. Between registration, hotel and various other costs, the amount I’m spending there will dwarf the proceeds for the autism run or the cost of the few food items I donated to Hustle for Hunger.

But going forward, I’d like to look for events – like the Hustle for Hunger – that will have an effect to go with all my effort. I may be older and slower, but I’d like to think that some of the races I run these days will have a bigger impact than simply causing me knee problems and shin splints. 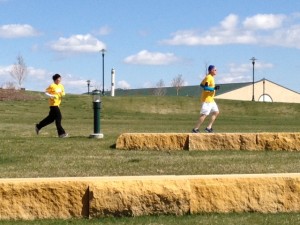 3 thoughts on “Hustling for Hunger”