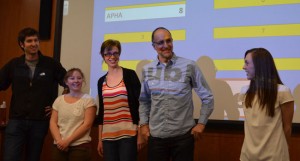 There was no kissing, but the spirit of Richard Dawson reigned at the second annual “PHamily PHeud” competition, held April 5 to close a week of public health-themed events.

Three teams of five – Team ROI, Team Conned and Team Mojo – competed in the event, in which the contestants were asked to match the answers to a 2012 survey on public health questions.

The kicker? The survey was taken not only by College of Public Health faculty, students and employees, but also by the general public. So the question, “Name something everyone should have in their disaster preparedness kit,” in addition to COPH-approved responses such as “water,” might yield an answer like “a flask of whiskey” or “a copy of King Lear.” (Tell me an English major didn’t give that response.)

“It’s more about predicting the things people might come up with, not so much the ‘right’ answers,” said Claudine McCarthy, president of the COPH Student Association. McCarthy said the “PHeud” event was such a hit in 2012 that the students were excited to bring it back.

Shawn Gibbs, Ph.D., associate dean of student affairs for COPH, acted as the emcee for the event.

Questions ran the public health gamut, from “Name an organization that deals in public health” to “Name a place in Omaha where people can be tested for sexually transmitted infections.” One team stole a round in the “Name a way to prevent infectious disease.” category by having the only contestant bold enough to answer “Wear a condom.” 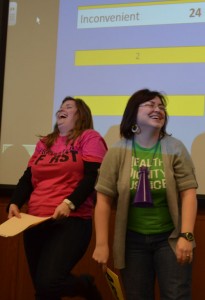 The mood in the room was high-spirited, with one team tossing pennies when it stole a category, and cries of approval and disappointment as survey answers were revealed.

The event was not without controversy. A too quick response from MPH student Jessica Chavez Thompson led to the adoption of “the Jessica Rule”– put simply, no answering the question before the question is completely asked.

Janelle Jacobson, a fourth-year Ph.D. student, was the leader of Team Conned, which lost in the final round to Team Mojo. Both she and Chavez Thompson agreed that the most surprising things about the survey answers were what was not included.

“It just goes to show that when you’re in this world of public health, you can forget … there are things we’re familiar with that maybe the general public isn’t,” Chavez said.

Martin said the student association has been pleased with the level of interest in its Public Health Week events.

“The turnout was very good, not only when we did things just for the college, but when we reached out to the wider community, as well,” Martin said.

And the PHeud was the perfect way to round out the week, Chavez Thompson added.

“I think it’s a very public healthy thing for us to do,” she said. “We want people to have happy lives, to do fun things with their families and friends, to do them together.”

One thought on “PHun at the PHeud”