Tammy Kielian, Ph.D., turned to the computer in her office and pulled up a picture of a young girl with glasses, with a sunbeam of a smile, the kind that reaches into your chest. It’s pixelized sunshine; a picture of childhood joy.

“This is Olivia,” Dr. Kielian said.

Dr. Kielian, a professor of pathology and microbiology in the College of Medicine, beamed a little herself.

“She’s a pistol,” Dr. Kielian said, then stopped, and looked at the picture again. 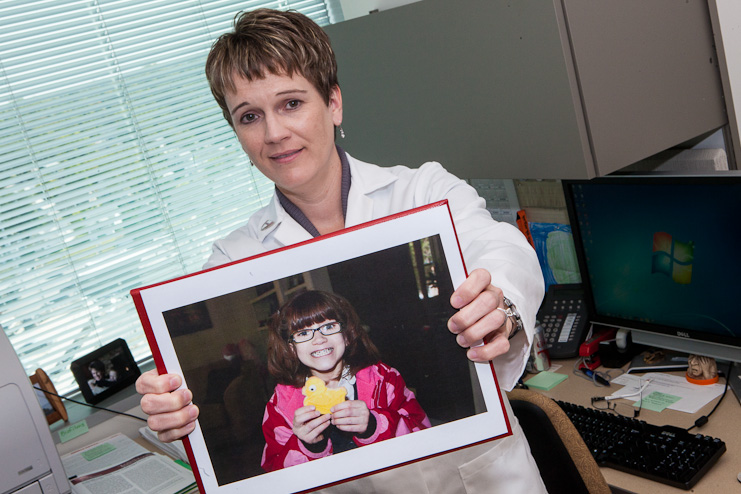 Olivia, the go-getter, the girl with the indefatigable smile, is Dr. Kielian’s 9-year-old niece; her sister’s youngest kid.

A while ago they noticed Olivia’s vision was getting worse. She went through two pairs of glasses before her family could blink.

A second-opinion suggested it might be the first sign of something else, and it was. Genetic testing confirmed Olivia has juvenile neuronal ceroid lipofuscinosis, better known as Juvenile Batten disease. It’s inherited, autosomal recessive, neurodegenerative. That was a little over a year ago.

Juvenile Batten occurs in about one in 100,000 live births, Dr. Kielian said. That’s very rare — but it still adds up to plenty of kids. That’s a lot of families that will mark time in two ways — from the day before they heard the diagnosis, and the day after.

“It changes everything,” Dr. Kielian said.

Look at that picture again.

Basically: Mutation of the gene CLN3 results in lysosomal storage problems. An abnormal amount of protein and lipids become trapped inside the cells. Like when the garbage disposal breaks, the body can’t clean the clog.

As the material accumulates in brain cells, neurons in the central nervous system begin to die. The first symptom is loss of vision. Then seizures. Then cognitive loss, then motor loss. Then premature death.

A lot of kids who have it are gone by their late teens.

For the past dozen years or so, it turns out, Dr. Kielian’s lab has investigated immune responses in the brain. She had an idea that maybe this had something to do with what her niece was going through; maybe her research might have an impact. She had to try.

David Pearce, Ph.D., an expert in the field, has published 60 papers on Batten. Dr. Kielian emailed Dr. Pearce, the director of the Sanford Children’s Health Research Center in Sioux Falls, S.D., and proposed a collaboration. Almost immediately, her computer dinged with his reply. Then her phone rang, too.

Dr. Pearce was excited. In this much unexplored field, her approach was novel.

Call it fate, coincidence — whatever.

Her research expertise was in line to make an impact on this disease.

Soon, Dr. Pearce’s mouse models — mice with mutated CLN3 genes, just like in these kids — were headed to UNMC.

And in these mice, Dr. Kielian found that the two types of brain cells she studies — the microglia, the brain’s first line of defense, and the astrocyte, which supports neuron viability — are activating early. Very early.

“We believe that when these cells turn on early, they inadvertently contribute to an environment that, down the road, leads to neuron death,” Dr. Kielian said.

Scientists see it all the time: sometimes our antibodies work against us.

“An overactive immune system may be contributing to this disease’s pathogenicity,” Dr. Pearce said.

Today, one of the goals in the study of Juvenile Batten is to slow down this process to give these kids more years and better ones.

Dr. Kielian hopes — along with other investigators grateful for her fresh perspective — that her work will inspire other researchers.

Meanwhile, Olivia is doing it all, and with abandon. She’s in gymnastics and Girl Scouts. She’s learning braille. Her mom has her in everything, has her breathing life in with great gasping gulps — like Olivia ever had a problem with that.

Kids who have Juvenile Batten disease can sometimes rage against the dying of the light. Or they can seem detached.

This awful thing steals them, neuron by neuron. Sometimes parents don’t even tell their kids they have the disease. Sometimes that’s for the best.

Olivia understands that someday she may not see. Right now, that’s what she knows.

Dr. Kielian asked her sister and her husband if there was anything they didn’t want her to talk about for this story. No, they said. Say everything.

“Seizures will initially be controlled by medication,” Dr. Kielian said. “Eventually they won’t.”

Now, a catch in her voice: “Cognitive loss will occur.”

Dr. Kielian soldiered on: “Speech will go. She won’t really be able to communicate anymore. She’ll be in a wheelchair. After that, bedridden. And then the end.”

Right now, their fight has only just begun.

But this is different. This isn’t in theory.

This isn’t your typical investigation. This isn’t abstract.

They are on the clock.

She nodded at the assessment, repeated it with a whisper: “We’re on the clock.”

But science doesn’t work like that. Research moves at its own pace; and Dr. Kielian has to detach herself — as a professional and a scientist. Her lab knows this story, of course. And she might mention her niece in an opening sentence at a conference. But, there is no picture of Olivia and her sunbeam smile in the lab or at presentations. There is no impassioned plea. There can’t be.

Instead, all she can do is push her sadness into a box and use it as fuel. And she does. And she will. This is what she’ll work on, forever.

“And I will always do it for her,” she said. Always, for Olivia. For that go-getter girl with the smile you can feel in your chest.

4 thoughts on “Tammy and Olivia”