The lime-green one is for Bailey, a 16-year-old girl. The light-purple one is for Diane, a go-getter from Seattle. And the orange one is for her, Lenice Hogan, a 47-year-old from Omaha. It simply reads “Hope After Stroke.”

The bracelets that take up most of Hogan’s left forearm each carry a special meaning, and represent someone, or something, from the stroke community. 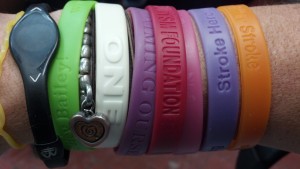 Hogan has suffered three strokes. Coincidentally, that’s also the number of marathons she’s run SINCE her third and biggest stroke robbed her of full function in her left foot.

The mother of three boys and inspirational speaker was on campus recently as part Triexercise, a free monthly program sponsored by the Olson Center for Women’s Health to help individuals accomplish their exercise goals.

As a runner, I went for the inspiration. And to hear Hogan’s story. For a stroke survivor to run one marathon, let alone three, boggled my mind. I tried to train for a marathon once. This was before kids. When I was 100 percent healthy. And 23 years old.

After numerous doctor visits (at another hospital system) it was finally determined she had a hole in her heart. Surgery closed it up, and she thought her health issues were behind her. Two months later, her third stroke caused her to collapse and lose the use of her left leg.

It was Dr. Pierre Fayad, who Hogan calls her “angel in life,” at The Nebraska Medical Center’s Stroke Center who finally diagnosed her with a venous angioma that bled. There is no known cause and no known cure. 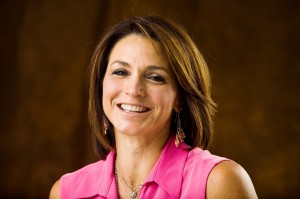 While Hogan walked out of the hospital of her own accord shortly after her third stroke, she spent the next two years in denial. Thirty-nine-year-olds shouldn’t have strokes. It wasn’t until she met a fellow stroke survivor that her life took a turn for the open road.

He, too, seemed too young to have suffered a stroke. He, too, was just trying to enjoy the sun on a Florida vacation. But the similarities ended there. Just as Lenice was relearning to run, he was struggling to walk. Her left foot was finally feeling good. His left side wouldn’t move and hadn’t in seven years.

She struck up a conversation with him. Hogan remembers eight words of it verbatim.

“You have no idea how lucky you are,” he said.

And that was it. After a few slow jogs on the beach in Florida, Hogan coincidentally received an e-mail from the National Stroke Association seeking runners for its first-ever New York City Marathon team. It seemed serendipitous. But everywhere Hogan turned, she hoped to find a roadblock. Sure, she’d run a mile on the beach, but 26.2 of them was unfathomable. After a green light from her physician and just as importantly, her mother, she called NSA, half-hoping the team was already full. No luck. She signed up.

She only had a few months to train, and was worried it wasn’t enough. But when Hogan stepped off the plane in New York, an overwhelming sense of peace came over her. She knew she could do it. And she did. She ran the whole thing and finished in just over five hours. 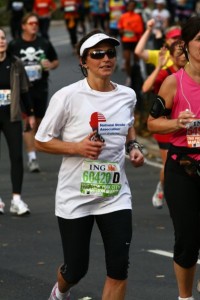 “Crossing the finish line was an amazing sense of accomplishment,” she said. “I wanted to sign up for the next one right then.”

She ran her second NYC marathon on behalf of NSA the next year and her third the year after that, bettering her time each year. She planned to run her fourth last fall, but Hurricane Sandy had other plans. So Hogan is signed up to run her fourth marathon in five years this Nov. 4.

I went to the TriExercise event thinking it would be a motivational speech. It was motivating, but not because Hogan told everyone, “you can do it.” She showed them. She doesn’t preach that marathons are for everyone. She’s the first to tell you how painful running can be, how long training takes and how scary it is for her to pound the pavement knowing she could have another stroke at any time.

“The least we can do is try to keep ourselves healthy,” Hogan said. “And it’s often our minds, not our bodies, that limit us the most. It’s about facing that fear and going for it.”

Watch a video about Lenice Hogan.

-You can do it in less, but six months is optimal training time.
-Practice your breathing. Hogan inhales for two steps, exhales for four.
-Purchase a GPS tracking device to keep track of mileage, etc.
-Subscribe to a running publication. Hogan recommends Runner’s World.
-Music/books on tape are your friends on long runs.
-Learn how to feed your body. Drink Gatorade to replenish electrolytes.
-If you can’t stand “goo” on long runs, Hogan recommends miniature chocolate Hershey bars and grapes for fuel.
-Listen to your body. Don’t ignore injuries and if you’re ill, take time to rest.
-Training for a marathon takes up a lot of time. Make sure your family is committed to supporting your training schedule.

If running is not your thing, UNMC recently kicked off a 10-week decathlon series with multiple choices for exercise activity. Register online by Feb. 25 to be eligible for a T-shirt.

To be notified about upcoming TriExercise events, email cmcdermott@unmc.edu.The educational talk series runs from noon to 1 p.m. in the Olson Center for Women’s Health classroom, on the fourth floor of the DOC. Speakers are listed below.