There are lots of reasons people don’t get flu shots.

Reason #1: Because one time, their second cousin’s Grandma’s mailman got the flu from the flu shot.  As UNMC’s infectious disease specialist Dr. Mark Rupp will tell you, this is one of many flu shot fables. Consider Dr. Rupp one of these guys: 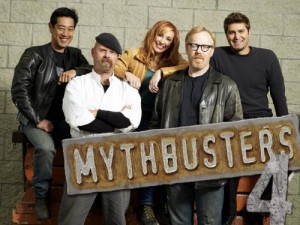 And Reason #2 through lots: Needles = Painful. Therefore, no thanks!

Well, there just might be something that can help with that. Two years ago, a group of UNMC pediatricians and psychologists from the Munroe-Meyer Institute published a study in Pediatrics about the “cough trick.”

Basically, they showed that if a child coughs just as the needle goes into his or her arm, it doesn’t hurt as much. Researchers weren’t sure if it worked because of the distraction factor or if the act of coughing somehow affected pain sensation.

I decided to test this theory out, you know, in the name of science. That, and I had to get my flu shot anyway.

Thankfully, a co-worker of mine also needed to get her flu shot and offered to take my picture while I attempted the cough trick technique.

When we arrived at the lower Storz Pavillion, the line looked longer than  the one for the ladies restroom at a Celine Dion concert, but before we knew it, we were at the front. Without even trying, I’d worn something to which my arm was easily accessible, an important thing to remember on flu shot day.

The College of Nursing student scanned my badge, counted to three and stuck the needle in just as I coughed and my co-worker snapped this picture. 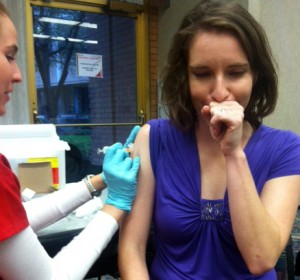 The verdict: painless. But I probably should have had her give me a shot in the other arm to make sure it was due to the cough trick. This is why I leave research to the pros.

Honestly, the coughing part did distract me. But so did having my photo taken during my flu shot and thus looking like a dork.

In conclusion, it doesn’t hurt (pun intended) to give the cough trick a try.