Happily ever after, a UNMC romantic comedy 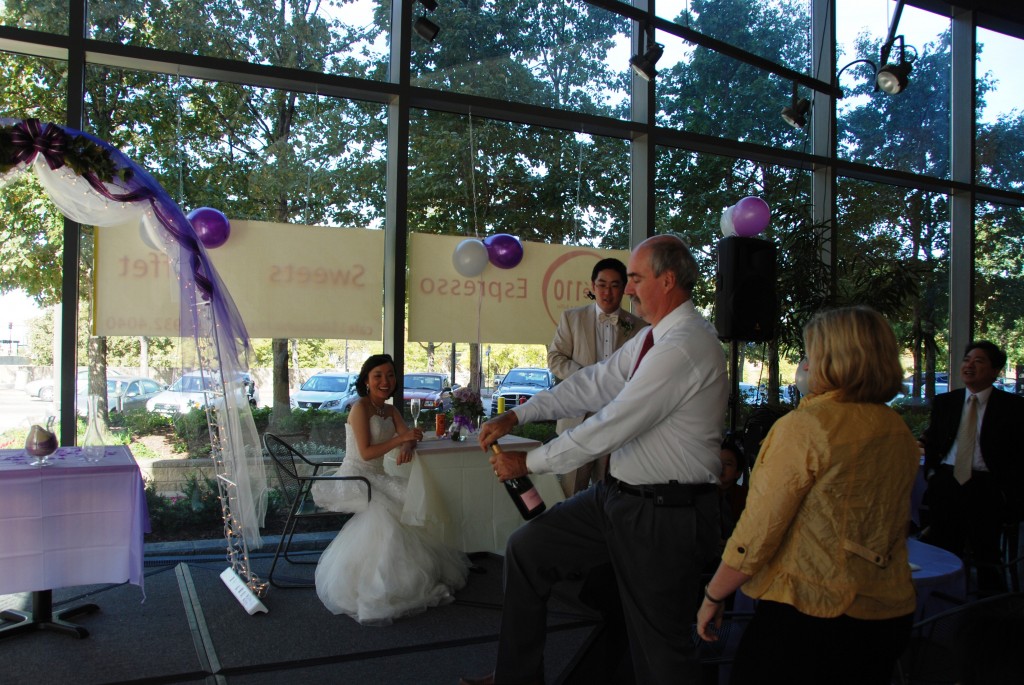 Tao Li, M.D., couldn’t believe his luck. He’d gone to the Student Life Center, to get his picture taken, for his UNMC ID badge. And there, also getting her ID, was a beautiful girl. And she smiled at him.

That smile! Had another woman in the history of the world ever smiled like that?

“It’s really a sunshine smile,” he said the other day, dreamily, looking over at her and seeing that smile again.

He couldn’t believe his luck.

He’d gone and married that girl.

Tao (Dr. Li, but since this is a blog about falling in love, we will call him Tao) and Minghui Chen had each come from China. Their hometowns are about three hours apart by train. They never would have met, if they hadn’t been at UNMC, getting their ID badges, on their first days as Ph.D. students in 2009.

It wasn’t long after that first encounter that they ran into each other in the Sorrell Center.

She walked past him, walked on for a while, then turned. She said hello, and flashed that grin again.

Why did she smile at him?

But it took him a while to get the hint. It wasn’t till about a year later (they had different circles of friends) that they had their first “official” date: “One-zero, one-zero, one-zero,” he said. “That’s August 10, 2010.”

They laughed, the way only newlyweds do.

And while it took Tao a while to get that he was supposed to make his move, when he did he wasn’t shy about doing so. Showing up to that first date, he announced he was there to meet his “girlfriend.” That’s extremely bold, in Chinese culture. But somehow, his boldness put an extra charge in the air.

And it turned out, “Very quickly,” Tao said, “we know we are the right ones for each other.”

So they were headed that way anyway. But when Tao went on an exchange program to Taiwan this past summer, they were apart for two months. And when he came back?

No more waiting. That was it.

They’d been Skyping with each other’s parents, and so on a 10-day trip to China, they had a wedding in Tao’s hometown and two receptions in Minghui’s. But when they came back, they wanted to make it official in America. They wanted a wedding in Omaha, the hometown they now shared, where they met, and lived, and loved.

So they started planning their Omaha wedding: “People told us that usually American people will spend a whole year getting ready,” Tao said.

So, how long did they spend?

“So we Googled a lot about how American weddings should be like,” Tao said. “And Dr. Audrey Paulman gave us a lot, a lot, a lot of ideas and suggestions.”

They chose colors, and vows. They wanted a sand unity ceremony.

“My advisor’s son played violin for us,” Tao said.

They got a minister from their Bible study group, and they sent out invitations with a week to go. They hoped, with everyone’s busy UNMC schedules, a few people might show up. Instead, everyone did.

It was beautiful. And when it was over, they went outside to surprises: “They decorated my car in a very American way,” Tao said.

And there was a horse-drawn carriage, to ride off into their new lives together. There they were, so great together; man and wife. The lucky guy and the sweet girl, who met getting their ID badges in their first days as Ph.D. students at UNMC.

12 thoughts on “Happily ever after, a UNMC romantic comedy”